Publication to be sent to the Pope and to Heads of State, and 6 million copies to be distributed world-wide. 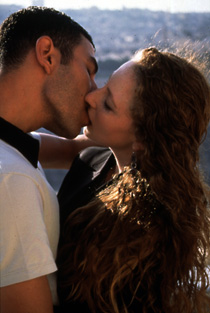 Ponzano, 5 March 1998. The world premiere of United Colors of Benetton's new Spring-Summer 1998 fashion catalogue was held in Jerusalem today at the Khan Theatre, symbolically situated between the East and West zones of the city. Through the photography of Oliviero Toscani, the catalogue tells the shared stories of peace between Israelis and Palestinians brought together by their everyday lives and the normality of relations between them. Those invited to the presentation, which was opened by Oliviero Toscani, included both Benjamin Netanyahu and Yasser Arafat (for whom two empty seats were symbolically reserved), and the writers Izzat Ghazzawi, Chairman of the Palestinian Writers Union, and Abraham B. Yehoshua, an Israeli, active in the Peace Now movement, who both contributed to the introduction in the catalogue.

In addition to students of both nationalities, the Israeli and Palestinian citizens who have contributed to the catalogue were present in the audience. Sitting together in the front row were Samer Sinijlawi and Mrs. Ilanit Sasson Melchior - the leaders, respectively, of a Palestinian youth movement and the WUJS (World Union of Jewish Students). During the presentation, they occupied the places set aside for Netanyahu and Arafat, symbolising the potential for cohabitation between the two peoples also on a political level.

Entitled Enemies, this catalogue is a realistic reportage: true stories of faces and characters who, as the stereotypes would have it, should be opposed to one another. Instead, they have been brought together by dialogue, friendship, love, shared interests or simply by habitual contact. "I have collected so many snippets of stories which tell of the possibility of peace", recalls Oliviero Toscani, "but without the traditional clichés". Here are the Arab greengrocer and his Jewish customer united by their passion for water-melons, students and friends from the Jerusalem Faculty of Law, the Palestinian and Israeli partners in a law office for the defence of human rights, a mixed class of children in the community of Neve Shalom-Wahat el Salam, the Jewish barber shaving his Arab customer with a cut-throat razor, the photographers and television crews who have come to know each other working side-by-side, the actors of a mixed theatre company.

All together without distinction, as A. B. Yehoshua puts it in the introduction: "..for me, the most shocking thing about Toscani’s photographs is that in many cases I am unable to distinguish the Arab from the Jew”. They are all together both in life itself, and in the pages of the Benetton catalogue, which is intended as a small message of hope. Because, as I. Ghazzawi put it "this land is for all of us and we must try to find equality, and a more significant value in the existence of man".

This is why Enemies will be sent to Pope John Paul II, to the Nobel Peace Prize Committee and to Heads of State throughout the world, and why six million copies will be distributed. They will be enclosed with some of the major international daily newspapers, such as Corriere della Sera and L'Unità in Italy, Le Monde in France, The Times in Great Britain, Ma'ariv in Israel, Frankfurter Allgemeine Zeitung in Germany, Pubblico in Portugal, NCR Handelsblad in Holland and Svenska Dagbladet in Sweden. The US weekly Newsweek International has also chosen to send Enemies directly to the homes of all its subscribers, accompanied by a letter of introduction.