Casual wear turnover in line with the previous year. Dividend proposed of 0.35 euro per share

Ponzano, 31st March 2003. Consolidated revenues of 2.0 billion euros, income before extraordinary items of 128 million euros, net income at a loss of 10 million euros, self-financing steady at around 350 million euros and net indebtness down to 613 million euros: these were the principal items in the Benetton Group results for the 2002 financial year, approved today by the Board of Directors. The Shareholders' Meeting (convened for 12th May) will consider a proposal for the distribution of a dividend of 0.35 euro per share, payable from 22nd May, equivalent to a total of 63.5 million euros.

In 2002, the strategic decision to focus Benetton activity on the core businesses of casual clothing and sportswear resulted in an extensive reorganisation of the sports equipment division, with the objective of bringing the Nordica, Prince and Rollerblade brands to a substantial break-even and launching the programme for their divestiture, which was finalised in the first quarter of 2003.

2002 turnover showed the staying power of the clothing division and a sharp drop in the sports division, with a total of 2.0 billion euros, compared with 2.1 billion in the previous financial year. The weakness of the dollar and the yen and exclusion from consolidation of the activities of the subsidiary Color Service adversely affected turnover by approximately 2%.

The Group's gross operating income was 867 million euros, 43.6% of turnover, from 43.3%, positively influenced by continuous research into manufacturing optimization and in-spite of an incisive price policy.

Income from operations, for an amount of 242.6 million euros, was 12.2% of revenues, with a reduction of 1.4% compared with the preceding financial year, due to the impact of general expenses for commercial development, which have not yet been absorbed by the potential increase in turnover.

In 2002, normalised consolidated net income (before extraordinary items) was 128 million euros. 2002 profits have been impacted by extraordinary and non-recurring elements, associated, in particular, with the sale of the sports brands, enabling the Group to focus on its core business. Consequently, the financial year registered a loss of 10 million euros.

The equilibrium and strength of the group balance sheet continues to be excellent, with net indebtness of 613 million euros and shareholders' equity, at 31st December 2002, of 1,141 million euros, making it possible to continue with the strategy of giving particular attention to shareholder remuneration, with a pay out ratio of 50 per cent of normalized income. In addition, working capital was reduced, also in the current financial year, to 798 million euros (from 811 million euros in 2001) as a result of effective control of operational flows.

Self-financing in the year, at approximately 350 million euros, was virtually stable, uninfluenced by the extraordinary items, and was well able to finance investments in the year of 169 million euros, mainly regarding the acquisition of real-estate and commercial companies to sustain the continued growth of the retail network.

2002 closed with indebtedness of 613 million euros, against 640 million in the previous financial year.

In the context of the process of restructuring and simplifying company structure, the Board approved a project for the merger of three subsidiary companies which supply services to the Group. This will be put to the approval of the Shareholders' Meeting, to be convened on 12th May.

Finally, the Board analysed trends for 2003 performance. In an economic situation characterised by a general contraction in consumer spending, the fall in sales in the clothing sector in general and the weakness of the dollar, it is expected that performance will be in line with the 2002 financial year, both in terms of turnover and margins. Net income is expected to increase, compared with normalized net income in 2002 and net indebtness will experience a sharp decline. 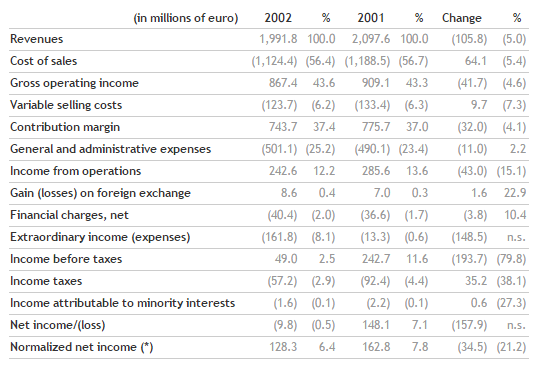 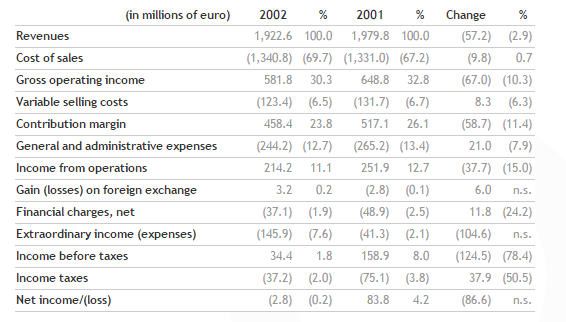