Consolidated revenues for 2005 amounted to 1,765 million euro, compared with 1,704 million in 2004, with an increase of 3.6%; this growth benefited from the good reception by the market of the 2005 Fall/Winter collections. Among the most significant elements contributing to the increase in revenues, were also the supplementary contribution deriving from the consolidation of the Turkish market and the growth of the South Korean and Indian markets, in addition to the growth in the network of directly operated stores.

Contribution margin was 643 million euro and 36.4% of revenues, compared with 38.4% in 2004, influenced in particular by the previously mentioned sales network development and offset by benefits associated with the search for specific skills and international manufacturing locations where our know-how can be introduced in order to guarantee the quality of our products and satisfaction of final customers.

EBIT was 157 million euro, compared with 158 million in 2004, and was 8.9% of revenues (9.3% in the previous year). This was influenced by net non-recurring expensesof 48 million euro, associated with the costs of reorganization and adjustments to the values of some activities in the sales network, the write-down of some non-core businesses, and expenses connected with the reorganization of the textile segment.

Orders collected for 2006 indicate a positive response from partners in the various markets to new product offerings and to new commercial initiatives introduced. In addition, in line with results in the second half of 2005, performance of directly operated stores is expected to improve further. The significant increase in volumes and a product mix targeting increases in accessories and collection segments with high unit values, such as tailored garments and men’s clothing, lead to expectations of an increase in 2006 consolidated revenues at least equal to that in 2005.

In 2006, significant growth is also forecast for markets in the Mediterranean basin, Eastern Europe, South Korea, China and India. The company will also continue to focus on the search for specific skills and international manufacturing districts where it can introduce its know-how, in order to guarantee the long-established standards of quality of its products. The continued attention to production and commercial efficiency makes it possible to forecast an EBIT of around 9.5-10% of consolidated revenues and net income in the region of 6.5%.

The Parent Company, Benetton Group S.p.A., closed the 2005 financial year, using Italian accounting principles, with net income of 58.3 million euro against 39.1 million in 2004. The Board resolved to propose a dividend of 0.34 euro per share (equal to the previous year) at the shareholders’ meeting, with a coupon detachment date of 15 May 2006. For payment of the dividend of around 62 million euro, about 58 million euro will be drawn from 2005 income and around 4 million from the extraordinary reserve. As from the 2006 financial year, the Benetton Group S.p.A. financial statements will also be prepared on the basis of IFRS.

Finally, the Board of Directors approved the new procedure for related party transactions and for significant transactions, which also implements provisions of the new Italian Corporate Governance Code (Codice di Autodisciplina) for listed companies. The new “internal dealing” regulation was also approved which governs, in compliance with the new laws, communications with CONSOB (Italian Exchange Commission) and the public about transactions in Benetton shares by persons identified as “relevant”.

(a) Does not include the disposal of short-term financial assets of 118 million euro.

(b) Does not include payment of substitute tax, residual effects of the sale of the sports equipment segment, and purchase of financial assets, amounting to 125, 49 and 90 million euro respectively. 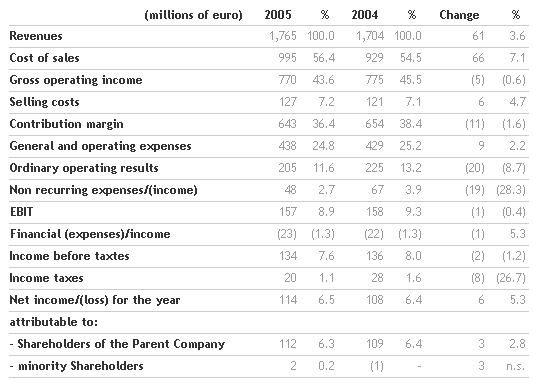 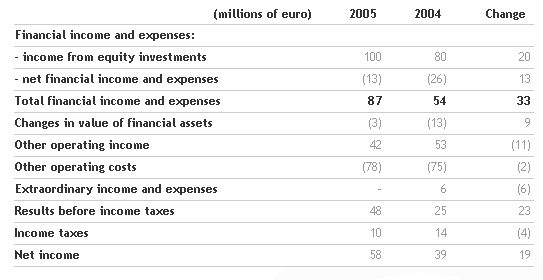