2008 first half results approved by the Board of Directors

2008 first half results approved by the Board of Directors

Ponzano, August 29, 2008 - The Benetton Group Board of Directors, meeting today and chaired by Luciano Benetton, examined and approved the consolidated results for the first half of 2008.

Growth in the half year was determined by: 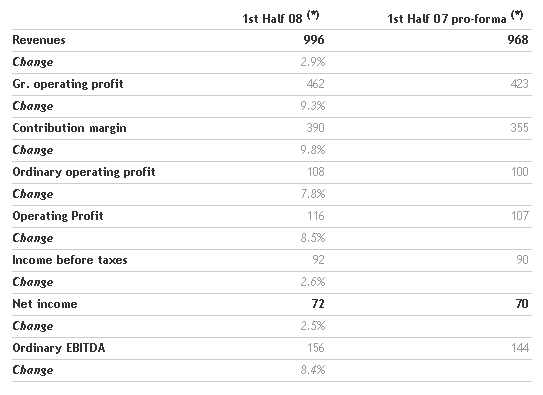 * Values in millions of euro

Gross operating profit was 46.4% of revenues compared with 43.7% in the first half of 2007, with an increase of 39 million euro, positively influenced by the combined effects of mix, as well as the ever greater efficiency of supply chain management and sourcing activities, in a context of constant attention to product quality.

The contribution margin increased by 35 million euro, reaching 390 million, with a percentage of revenues which increased to 39.1% from 36.7%, containing a slight increase in variable costs, associated in particular with the rise in oil and transport costs.

The most significant elements which in the half year impacted on general and administrative expenses (+26 million euro) were:

Ordinary EBITDA increased by 12 million euro to 156 million, equivalent to 15.7% of sales compared with 14.9% in the comparative half year.

As a result of the increase in interest rates, the average financial indebtedness and the strengthening of the euro against the principal currencies, financial expenses and currency hedging losses increased by 7 million.

Progress achieved in previously initiated projects relating to the Benetton Adultcollection confirmed the efficacy of the objective of enriching individual product categories. In particular, shirts registered an increase of around 40% in the last two years.
Benetton Man saw the opening of 30 new stores. For Benetton Children, the new “System” concept was presented on the occasion of the opening in Milan, for around 3 months, of the first temporary store for children. The System concept, whose function is to diversify the offer by age range, is also used for the new Benetton Baby stores targeting the newborn to 5 years age band and new mothers, and which saw the opening of 35 dedicated stores.
The Sisley Young line, for fashion-conscious youngsters, opened 15 stores in Italy and abroad.
The accessories segment continued its strategy of opening dedicated stores under theBenetton and Sisley brands, with 10 new openings. Accessories recorded an increase in revenues of around 50% in the last two years.

Particular emphasis was given in the first six months to the underwear business. For the 2008 autumn/winter season, the Baby Under line was launched, which completes the Undercolors collections: garments for baby boys and girls and unisex garments which, drawing on adult nightwear themes, update traditional new-born babywear.
This product line will be distributed in specific corners in around 500 Undercolors network stores.
In addition, the totally new Sisley Underwear line has been created, which will be given a special launch for the Christmas Season; men’s and women’s underwear and accessories with a sensual and chic style, and a high fashion content. The collection will come alive with its own identity in some single-brand stores by means of an innovative concept.

Results by geographic area in the half year were impacted by strong exchange rate fluctuations. Emerging markets identified by the Group to accelerate growth (Russia and ex-Soviet Union countries, Turkey, India, Great China and Latin America) continued to produce results in line with expectations, +25%, bringing their contribution to 11% of total revenues. The positive performance in established markets, taking account of the temporary block on shipments which occurred at the end of the half year, confirmed the effectiveness of initiatives undertaken and Group ability to take advantage of the various opportunities in local markets.

In Mexico, in May 2008, an agreement was signed with Sears, the leading distribution company owned by the multinational Grupo Carso (Slim family), for the development of United Colors of Benetton in that country. The agreement provides for the opening of points of sale which will offer the quality and fashion identity of the UCB man, woman and children collections within Sears department stores throughout Mexico. The openings of stores and corners to date in the main Mexican cities are in line with the development programme which provides for around 250 points of sale in only three years. Following this first agreement, the Group development programme for the American continent provides for the strengthening of its presence in other Latin American countries.

As part of this project and the redefinition of strategies in individual regional areas, the Benetton offices in Miami, Florida have become operative, managing all USA retail activities which were previously based in Washington. The Miami offices, strategically located between North and South America, supervise the commercial and sourcing activities of the area.

In India, the first Benetton Man store opened in New Delhi, in Connaught Place, with over 300 square metres of floor space dedicated to casual and formal wear. A new United Colors of Benetton store - man, woman and children – opened in Kolkata, in one of the city’s leading shopping locations, with a floor area of around 300 square metres and over 24 metres of store frontage.

In Russia, in addition to the recent inauguration of the new offices of the commercial agency in Moscow, the Group has initiated activities for the direct management of services, logistics, transport and imports. This step further strengthens our presence in the area, with the objective of offering a more efficient and timely service to customers in the Russian market.

In the first half year, Group net operating capital expenditure was 102 million euro. Gross investments of around 82 million euro were dedicated to the commercial network for the purchase and renovation of stores in selected geographic areas, significant in terms of development of the sales network and of expected performance. A further 24 million euro gross capex was dedicated to production and logistics, in particular in Tunisia and for the distribution hub in Castrette, Italy.
In June, Tunisian Prime Minister Mohamed Ghannouchi, presented to Alessandro Benetton the “Investor of the Year Award” granted by the National Awards Commission “in recognition of the contribution of the Benetton Group to the development of the apparel sector in Tunisia and the increase in its competitiveness”.

OUTLOOK FOR THE FULL YEAR

In the light of the half year results, the Group confirms the 2008 full year objectives, although recognising the uncertainty associated with the unfavourable economic situation and the risks introduced by the increase in raw material prices and the acceleration of inflation in Asian countries.
In consideration of actions already put in place by the management to contain and compensate for the negative impact of these factors, the commitment to achieve Group objectives is reconfirmed, with revenues expected to grow by around 6%, and EBITDA and income from operations up by at least 7% compared with 2007.
Capital expenditure in the year should be around 250 million and, in particular:
- investment projects to double the size of the Castrette logistics hub (in Italy) and regarding the production facility in Tunisia will be completed;
- investment will continue for the opening of new stores in markets considered to be strategic for the Group;
- implementation of business support IT systems will continue. Net financial indebtedness is expected to be confirmed around 650 million euro by the end of the current year.
Declaration by the manager responsible for preparing the company's financial reports
The manager responsible for preparing the company's financial reports, Emilio Foà, declares, pursuant to paragraph 2 of Article 154-bis of the Consolidated Law on Finance, that the accounting information contained in this press release corresponds to the document results, books and accounting records."
Disclaimer
This document contains forward looking statements, specifically in the section entitled “Outlook for the full year”, relating to future events and operating, economic and financial results of the Benetton Group. By their nature, such forecasts contain an element of risk and uncertainty, because they depend on the occurrence of future events and developments. The actual results may differ, even significantly, from those announced for a number of reasons.

On April 1, 2008 the Group sold its sports equipment manufacturing business to third parties, meaning that the income and expenses of the discontinued operations have been reclassified and reported in a single line in the statement of income "Net income from discontinued operations". The related figures for the corresponding period in 2007 have also been reclassified to make them comparable with 2008.

As stated previously, after the amounts relating to the discontinued sports equipment operations were reclassified, the figures for 2007 have been restated to make them consistent with those in 2008. 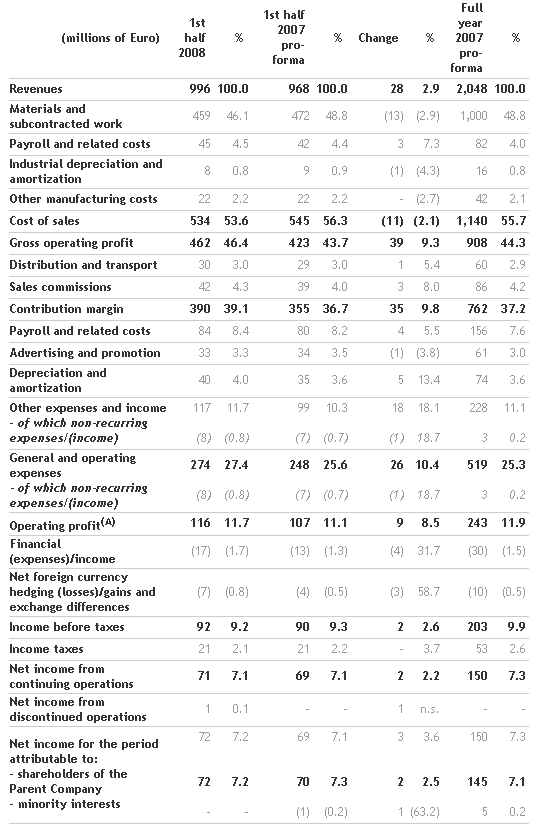 Management has decided to present working capital in the strict sense of the term, meaning that direct taxation has now been excluded, also in keeping with requests from the financial community. As a result, the following items have been reclassified from "Other receivables/(payables)" to "Other assets/(liabilities)": deferred tax assets and liabilities, receivables due from the tax authorities for direct taxes and receivables and payables from/to holding companies in relation to the group tax election. 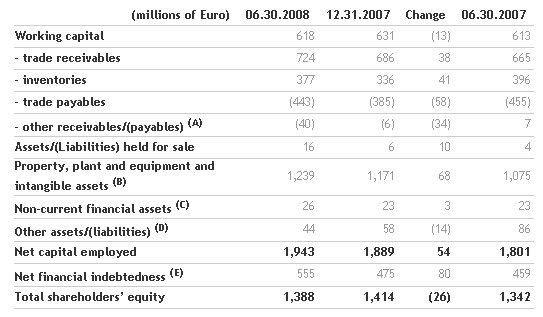 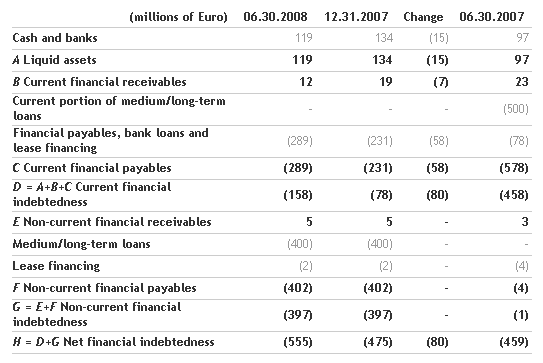