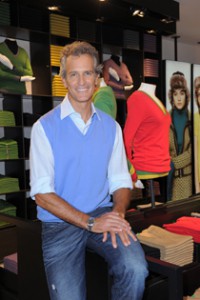 Ponzano, 23 January 2012. Alessandro Benetton receives today the prestigious accolade from Ernst & Young for his contribution to the managerial evolution of Benetton Group and to the development of the Italian entrepreneurial system through 21 Investimenti. The Executive Deputy Chairman of Benetton Group will receive the Ernst & Young award at Palazzo Mezzanotte, Milan, (home of the Italian stock exchange) “for consolidating and renewing a firm that has played a leading role for over 40 years in the Italian and world markets”. Alessandro Benetton will represent Italy at the Ernst & Young World Entrepreneur Of The Year Awards in Monte Carlo, to be held in June.

In 1992 Alessandro Benetton began his personal, independent journey into the Italian private equity sector, founding 21 Investimenti, a company of which he is still chairman, with the aim of closing the gap between finance and industry, and of participating in the growth of companies with extensive development prospects. In 2004 he agreed to take on the future of Benetton Group, called upon by the family for his strategic and entrepreneurial experience and ability. He has been Executive Deputy Chairman of Benetton Group since 2007, and during these years he has guided the company's transition towards a management structure with a clear distinction between the roles of shareholders and management, a process which has now been completed, with a new top management team that aims both to strengthen the group and to develop business in Italy and worldwide.

Actions and investments have been particularly aimed at the modernisation and expansion of the worldwide distribution network, for example in high growth potential markets such as India, Russia, Mexico and Poland, and at strengthening the identity of the Group's main brands: United Colors of Benetton, Sisley and Playlife.

Within the framework of his innovative plans, Alessandro Benetton wanted the group to increasingly address the world of the young, of social media and the internet, with a precise digital communications strategy – which will receive up to 80% of investments over the coming years – designed to achieve major results in a short time.

This has already been demonstrated with the recent UNHATE campaign, which, continuing along the same lines of Benetton's long-standing social and cultural identity, achieved a remarkable response worldwide, and especially from the world of internet and the new generations, both in emerging areas such as India and Latin America, and in technologically advanced countries like the United States, for a total of 500 million users. In the first days of the UNHATE campaign, this global participation placed it among the top five topic trends worldwide on both Twitter and Google, with Facebook fan numbers increasing by 60%, as well as great attention from the international media to the message of the campaign, with over 3000 articles published and more than 600 television reports in 60 countries around the world.

Among the most well-known Italian apparel brands in the world, Benetton is now present in 120 countries, with a network of 6,400 stores, producing an annual turnover of more than 2 billion euro. Rather than relying on the company's past achievements, Alessandro Benetton rejects a position of immobilism, preferring instead to look to the future: he is developing the Benetton of tomorrow to be an increasingly international, competitive company, but also an ethical and responsible one.