Benetton Group Board of Directors approves the 2008 Financial Statements and proposes dividend of 0.28 euro per share

Benetton Group Board of Directors approves the 2008 Financial Statements and proposes dividend of 0.28 euro per share

Alberto Nathansohn will take the office of CFO

The 2008 results achieved the Group’s preset objectives, despite the deteriorating international economic situation, which became particularly evident in the fourth quarter of the year. Far-reaching structural actions were carried out with resolve in the period and yielded the expected benefits. Of particular note were the improvement of the supply chain structure with the aim of strengthening service to the network of partners, acceleration of profitable growth in strategic countries, such as the former Soviet Union, India and Turkey, and completion of the new organizational structure based on brand and market Business Units.

2008 Group net revenues showed growth of 3.9% to 2,128 million euro; the increase, after eliminating exchange rate impacts (currency neutral) and on a like-for-like basis, was 5.7%. Apparel segment sales to third parties were 2,034 million euro, with a currency neutral increase of 5.6%. Growth in the financial year was largely determined by the enhancement of the offer with higher value product categories and increased sales volumes, as well as accelerated growth in strategic countries, such as Russia and the former Soviet Union, India, Turkey and Latin America, with the positive trend confirmed by 150 new openings in the year.

EBITDA grew by 4.1% in the year to 354 million euro, benefiting from the positive impact of the substantial actions undertaken, in particular the reduction of the complexity of collections and refinements introduced into the supply chain, with significant improvement in terms of efficiency and effectiveness, also in respect of the sales network.
Net income for the year was 155 million euro, compared with 145 million in 2007, and 7.3% of sales (7.1% in 2007).

Compared with December 31, 2007, working capital increased by 91 million euro, due to the combined effect of the increase in net trade receivables, associated mainly with the growth in apparel sales, the increase in inventories due to the greater incidence of the direct channel resulting from the greater number of companies consolidated and the increase in trade payables, which was also influenced by the new collection calendars and related production planning.

Capital employed grew by 192 million euro due to the increase in working capital commented on above and the net increase in tangible and intangible assets, relative in particular to gross operating investments in the year of 228 million euro and depreciation and amortization of 100 million.

Total net investments were 209 million euro (230 million in 2007) due largely to investments for the sales network, aimed in particular at the Italian, French and Spanish markets, as well as those in priority development countries such as India, Russia, the former Soviet Union and Turkey, and production investments, relating especially to the logistics hub in Castrette di Villorba (Italy) and the manufacturing facility in Tunisia.

The Board then approved the draft annual financial statements of the Parent Company(1) and submitted a proposal to the next Shareholders’ Meeting, convened at Ponzano for April 20, 2009, (first call and April 24, second call) for payment of adividend totalling 48 million euro, equivalent to 0.28 euro per share (0.40 euro per share in 2008). Payment of the dividend is planned as from April 30, 2009, with coupon detachment date of April 27, 2009.

CEO Gerolamo Caccia Dominioni, then presented the management forecasts for the current year to the Board. In view of measures already initiated to contain and compensate for the negative impact of the crisis, the Group has set itself as primary objectives for 2009, on the one hand, strengthening of market share both in established countries and those identified as strategic for development, and on the other hand, the maintaining of its own profitability.
To this end, an extensive reorganisation plan has been initiated which will enable continued investment, accelerate development, limit the risks of future inflationary pressures, significantly renew the organisational structure and generate cash flow.
The structural savings produce by this strategy will be partially available from the second half of the year, and fully in 2010, for an annual amount of over 50 million euro, which will be used in part for development and to balance restructuring costs.

In synthesis, the four areas of intervention are:

Alberto Nathansohn will join the Benetton Group as Chief Financial Officer with effect from May 1st. Nathansohn, 51, has matured extensive experience with Bulgari and Eurofly Service SpA, as well as with the Pirelli Group, where he held positions of responsibility both in Italy and abroad.

The Board approved a report for submission to the Shareholders’ Meeting relating to authorization for the purchase and sale of Company shares with the terms and conditions illustrated below, subject to revocation, for the part not yet executed, of the authorization by the shareholders' meeting resolution of 24 April 2008.
Authorization is requested for the purchase of a maximum number of shares which, together with the shares currently held, does not exceed the limit of 10% of the share capital and for a period of 18 months. The minimum purchase price is envisaged as not less than 30% under, and the maximum price not more than 20% over, the reference price recorded by the share in the stock exchange session preceding each individual transaction; the selling price is envisaged as not less than 90% of the reference price recorded by the share in the stock exchange session prior to each individual transaction.
The authorization is requested to enable the Company to acquire a portfolio of treasury shares, which may also be used to serve any share incentive schemes. This authorization would also give the Company the power to act on its own shares, for the purposes and in the ways permitted by current legislative provisions, also taking advantage of any strategic investment opportunities.
The purchases will be made in markets regulated, organized and managed by Borsa Italiana S.p.A. and in accordance with its procedures. The Company currently holds 10,345,910 treasury shares, corresponding to 5.663% of share capital.

Finally the Board approved the Corporate Governance Report relating to the 2008 financial year, prepared in compliance with the Experimental Format proposed by Borsa Italiana.

The manager responsible for the preparation of company accounting documents, Lorenzo Zago, declares, in accordance with paragraph 2 of article 154b of the Tax Consolidation Act that the accounting information included in this press release corresponds with the documentary results, books and accounting records.

On April 1, 2008 the Group sold its residual sports equipment manufacturing business in Hungary to third parties, meaning that the income and expenses of the discontinued operations have been reclassified and reported in a single line in the statement of income "Net income from discontinued operations". The related figures for the corresponding period in 2007 have also been reclassified to make them comparable with 2008.

As stated previously, after the amounts relating to the discontinued sports equipment operations were reclassified, the figures for 2007 have been restated to make them consistent with those in 2008. 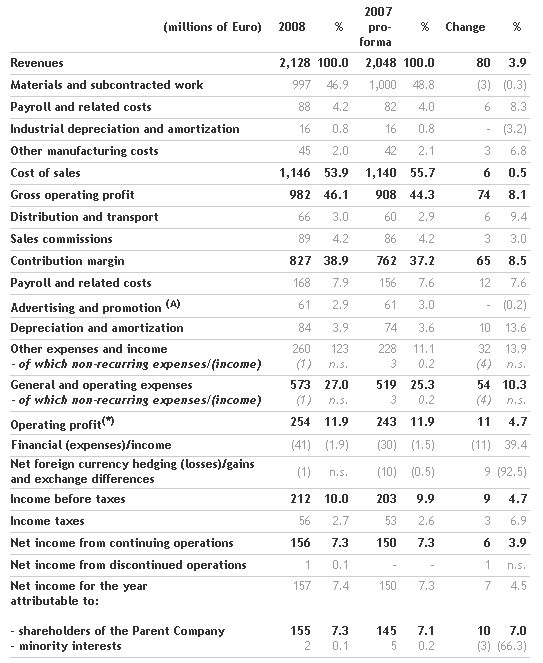 Management has decided to present working capital in the strict sense of the term, meaning that direct taxes and receivables and payables not relating to working capital have now been excluded, also in keeping with requests from the financial community. As a result, the following items have been reclassified from "Other receivables/(payables)" to "Other assets/(liabilities)" for all the periods presented: deferred tax assets and liabilities, receivables due from the tax authorities for direct taxes, receivables/payables due from/to holding companies in relation to the group tax election and payables representing the valuation of put options held by minority shareholders. 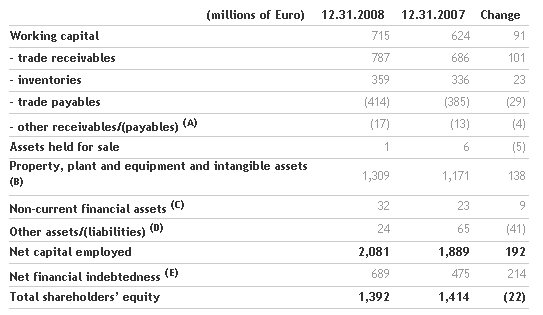 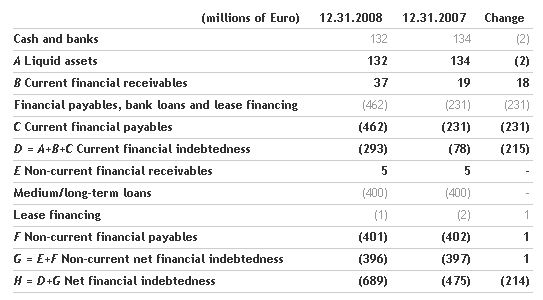 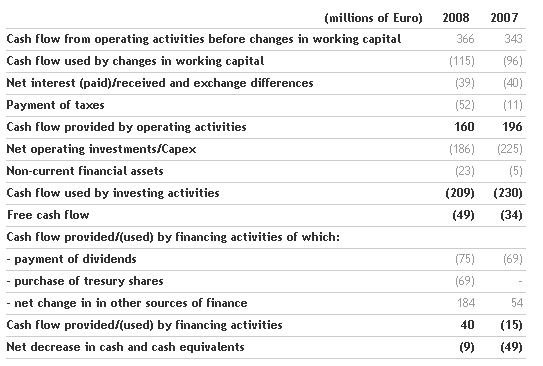 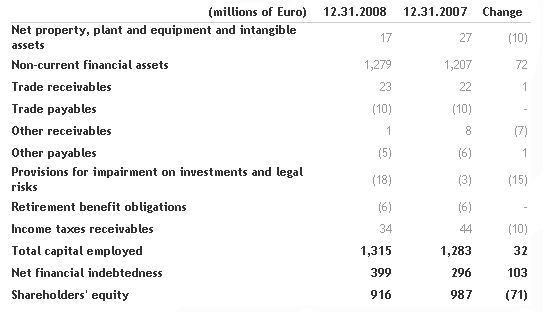