Ponzano, September 13, 2006 - The Benetton Board of Directors today approved the consolidated results for the first half of 2006.

Revenues in the “Apparel” sector were influenced by higher contribution of the Turkish partnership (established in May 2005), for 14 million euro and by the sales growth of directly operated stores. Revenue performance from the network managed by partners was mainly driven by commercial development strategy, including the increase in margins to the network, and the positive reception by the market of the collections.

Sales were affected by positive exchange rates, for around 5 million euro (+0.6%).

Luciano Benetton, commenting the first half figures stated “the development of the Group present in all the major markets and the strong acceleration in the orders we are registering confirm the strength of our world-wide commercial network and the appreciation of the quality of our products by the final consumer.” The Chairman of Benetton Group added “I have the firm conviction that this tendency is only the beginning and I expect to see further growth in the future.”

Gross operating income was 42.3% of revenues compared with 43.8% in the same period of 2005, with a contribution margin of 35.1% compared with 36.6% in the corresponding period of 2005.  Margins were primarily influenced by policies implemented by the Group to stimulate development of the network and to increase margins to the commercial partners.

EBIT was 89 million euro compared with 95 million euro in the first half of 2005 and 9.9% of revenues compared with 11.2% in the comparative half year, with the percentage of general and operating expenses remaining almost unchanged.

Net income attributable to the Parent Company was 64 million euro, equivalent to 7.1% of revenues, compared with 63 million euro in the first half of 2005 (7.4% of revenues).

The net financial position was 292 million euro, against 475 million euro at June 30, 2005 (and 351 million at December 31, 2005), resulting from improved working capital management and in spite of higher operating investments.

The results for the first half of the year allow the following forecast for 2006: an increase in revenues of around 8%, EBIT in the region of 10% of consolidated revenues and net income of around 6.5%-7.0%.

Contextually to the Group Half Year Report, the Board of Directors also approved that of Benetton Group S.p.A., prepared for the first time in conformity with IFRS, and which includes, in an attachment with related explanatory notes, the reconciliations required by paragraphs 39 and 40 of the international accounting standard IFRS 1 "First-time adoption of International Financial Reporting Standards".

The amounts shown in the  reconciliation document have been certified by the audit company PricewaterhouseCoopers.

This document includes indications of future company prospects which reflect the current opinions and forecasts of the Management. Any indication relating to the future of the company is subject to certain risks and uncertainties which could cause material variations in the final results compared with forecasts made. Potential risks and uncertainties include factors such as general economic conditions, fluctuations in exchange rates, pressures from competitive products and prices and changes in regulations.
First time adoption of the International Financial Reporting Standards

Benetton Group S.p.A. has reclassified its financial statements for the first half of 2005 and full year 2005 in accordance with International Financial Reporting Standards (IFRS); the main differences between Italian accounting principles and IFRS are discussed below.

Net capital employed and the net financial position have increased as a result of adopting Ias 39 and Ifrs 2.

Income statement by nature of cost 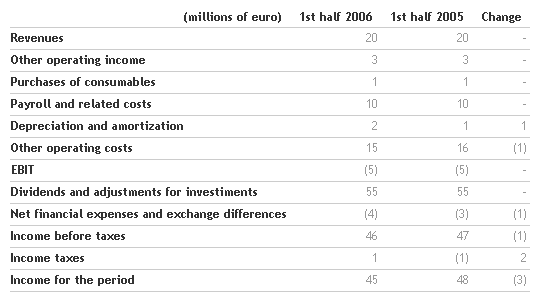 Figures not yet audited 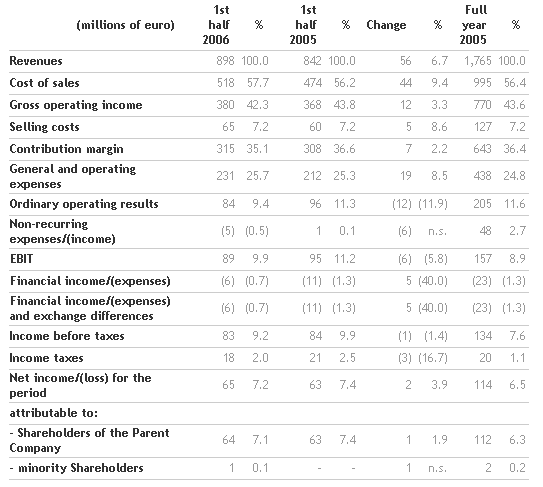 (A) Includes 29 million euro in proceeds from the sale of financial assets.
Figures not yet audited