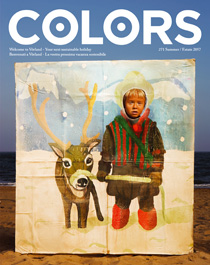 What will happen if the Planet keeps getting warmer? Will we have to drink water from puddles, move to igloos in the North Pole, shave the fur of polar bears or always carry a hurricane kit in our bags? Colors tried to find out by moving the editorial team into the future and visiting Vörland, an island off the coast of Scandinavia where the climate is perfect and there’s also lots going on.

For centuries Vörland was thought of as a freezing, inhospitable island. But it not only brilliantly survived the hard times at the end of the Petroleum Era and during the Sixth Mass Extinction, due to global warming, it has also become one of the most popular tourist destinations in the world. Here the temperatures are mild, vegetation is lush and the beaches are wide and sandy, a far cry from the torrid summers of Southern Europe. And the locals – most of them are Scandinavians covered in a double layer of sunscreen – paid attention to the alarm sounded by scientists on climate change and worked to turn the island into a green oasis, able to use its resources without any wastage.

A few examples? Certainly: if you want to get to Vörland forget airplanes. They’re too polluting. You have to get on Mr Lennart’s hot air balloon taxi and hope that Nature will be kind to you. To buy anything, you need to give some of your time or pay with karbons, which has been the official currency since the euro fell into disuse and the economy switched to carbon dioxide. If you’re in the mood for a chat, drop in on Klara Åkerlund, the seven-time champion of Vörland’s Clean Energy Award. She’s a true genius in the field of energy self-sufficiency. Or visit VörAir’s headquarters and ask company owner Felix Vindsson why he switched his business from the production of airplane components to the green business of making turbines for harvesting wind energy. One last thing: if you’re looking for a petrol pump you’ll find one near the biofuel fields. Abandoned for years, it’s now the Monument to the Petroleum Era.

If this guide to the island of Vörland doesn’t do it for you, go to the second part of the magazine. You’ll find the Green Pages waiting for you, an unusual encyclopedia on sustainable development and everything – or almost everythingthat is good and green. Things you can do right now around the world. Compiled in collaboration with the University of Siena’s Science, Chemical Technologies and Biosystems Department.

COLORS 271, published in 3 bilingual editions and distributed in 40 countries will be on newsstands in June.