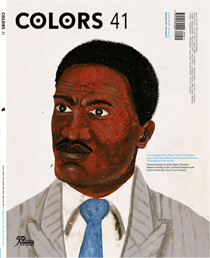 On December 9th Colors41 hits the newsstands with a new look. Readers will be surprised with the new content and the new way of confronting it, too.

The new issue is dedicated to refugees in celebration of the 50th anniversary of the United Nations High Commissioner for Refugees. But, instead of having a general overview of the problem we decided to focus our attention on a single refugee camp–Lukole, in Tanzania–where the editorial staff of Colors spent three weeks in August. That's why every person photographed has a name and a story: because Colors photographers and writers were there to talk to them.

As Eric Ngarbo, a Tanzanian boy from a local town described it, “Lukole is like a city in the middle of nowhere.“ The camp is built on, and of, a vast basin of red dust in northern Tanzania near the Rwandan and Burundian borders. Home to 120,000 Hutu exiles for seven years, Lukole has no electricity, no permanent structures and no secondary schools. During long days, hunger and boredom hang in the air. A young man counts the number of paces from one end of the camp to the other. The only time he is alone is when he shits.

All sorts of people live there. Some are the wives and children of rebel soldiers, removed to a safe haven while the men fight. Some are sent by rebel armies to recruit young men. But most are there because armed men invaded their villages with the intent of killing everyone. Most fled for their lives with only the clothes on their backs.

Despite the desperate situation, we found that people still find ways of carrying on with their lives, keeping their culture alive and looking good. In the camp there is a market, a cinema, a football league and a street full of bars. And most of all, every face tells a story of dignity and beauty.

The new look, created by acclaimed designer Fernando Gutiérrez who joins Colors as Creative Director beginning with this issue, helps to express this dignity and beauty.