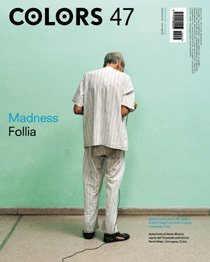 Madness. Still a taboo subject in many parts of the world, the mentally ill are marginalized, abused, excluded from society and often denied basic treatment. But attitudes and approaches vary as COLORS 47 reveals.

In the Ivory Coast we found that people thought to be mad are held prisoner by traditional healers in the forest. People like Christian, who has spent the past 14 years chained by the foot to the same tree.

Physically restraining the mentally ill is not restricted to Africa though. In Italy we visited a criminal asylum, home to 180 certified prisoners. The day before we arrived, Francesco had flown into a blind rage and had been restrained for his own safety. We found him alone in a cell, strapped to a bed with a hole in the middle through which he could defecate.

In Cuba, where attempts have been made to put patients back into the community, we met Victor who first started experiencing attacks of paranoia while fighting South African forces in Angola. On the other side of the Atlantic Ocean we found Christiaan in the Valkenberg Hospital in Cape Town, South Africa. He was also hospitalized after returning from the same war but after fighting on the other side.

In the US, 44 million people a year are treated for mental disorders. During the 1980s when community-based support projects were closed by budget cuts, many psychiatric patients ended up on the streets and then on crack cocaine as COLORS discovered at a shelter for mentally-ill homeless people on Los Angeles’s notorious Skid Row.

From the clean, hygienic surroundings of a psychiatric hospital in Switzerland to a poorly equipped, run-down asylum in Albania, we have spoken directly with mentally-ill patients around the world. COLORS 47 is an honest and down-to-earth record of their thoughts, opinions, deliriums, hopes and fears.