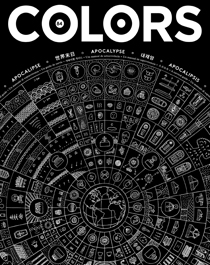 Treviso, summer 2012. Struck by a meteorite, annihilated by a pandemic, fried in a nuclear holocaust or frozen in a new ice age: according to numerous prophecies, our civilisation could come to an end at any moment. But in fact, the Apocalypse is already here. Global temperatures are the highest they've been in 1,000 years, and in the next century, they look set to increase five times more than they have already, leading to fires, drought, famine, hurricanes and floods, toxic sandstorms, seas uninhabitable for their wildlife, and poisoned rivers and streams. The earth will shake. How will we survive?

Around the world, some people are already facing the environmental catastrophes that will confront the rest of us in the near future. In the new issue Apocalypse: A Survival Guide, COLORS tells their stories and shows the methods and objects they use to resist destruction. Together, they form a detailed and colorful survival kit, with instructions and suggestions on how to climb out of any abyss humanity might throw itself into.

Out of a population of 80,000, Naoto Matsumura is the only person still living in Tomioka, Fukushima, where the cores of three nuclear reactors went into accidental meltdown in March 2011 following damage from an earthquake and subsequent tsunami. Naoto spends his days looking for abandoned animals to take care of. So far he has adopted dogs, cats, rabbits, chickens, ducks and cows. But Naoto is not afraid: although his body has extremely high levels of radioactivity, it will take some thirty years before he gets sick, by which time he will already be an old man.

Doug Huffman is chief instructor at the Sierra School of Survival in Pilot Hill, California, which, according to seismologists, will be struck by a disastrous earthquake in the next thirty years. Doug believes that the highest priority in case of catastrophe is not food, but ensuring your own physical safety, and being able to camouflage yourself, without being seen or heard by anyone, 24 hours a day. Only by becoming "the grey man" is it possible to survive, be it in the desert, the forest or a sprawling metropolis.

Bruce Beach, on the other hand, is the inventor and constructor of Ark Two, the world's largestprivately constructed nuclear fallout shelter, located in the village of Horning’s Mills in Canada. The structure is composed of 42 disused school buses, buried underground, accessible through a 16-metre shaft. When the apocalypse arrives, it will offer shelter for 1,000 people. But only "those best suited to serve the community" will be able to access the ark, which will be ruled with a strict social hierarchy.

The tsunami that befell the Indian Ocean in 2004 killed 230,000 people. In order to save himself from such catastrophes, seventy-year-old Chinese ex-policeman Zhao Chengweng, decided to design aspecial tsunami-proof capsule. Nicknamed Noah's Ark, the capsule, which is spherical so as not to capsize, will be eight metres by five, with room for five people. On board there will be electricity, food and water for seven days, a radio, GPS and medicines.

COLOUR 84 - APOCALYPSE
Summer 2012. In addition to the five bilingual editions (English + Italian, French, Spanish, Korean and Chinese), starting with issue n°. 84, a Portuguese edition will also be launched, thanks to an agreement with Brazilian publishers Amarello of Sao Paulo, who will distribute the magazine in Brazil.
http://www.oamarello.com.br/
Available online from the website
http://www.colorsmagazine.com/subscribe/