Ponzano, 27th April, 1998. Consolidated revenues of 2,056 million US$ (3,637 billion Lire)  and consolidated net income of 164 million US$ (290 billion Lire), after the acquisition of 57% of Benetton Sportsystem, carried out in July 1997, to establish one of the major international casual clothing and sportswear groups, through a combination of the design, manufacturing and commercial capabilities in fabrics and clothing with the know-how of some of the most famous sports brands in the world: these were the main results achieved by the Benetton Group in 1997, approved today by the Board of Directors, which will propose that the Ordinary Stockholders’ Meeting (called for 27th May next) should declare a dividend of 0.297 US$ (525 Lire) per share, payable from 22nd June 1998.

Concerning market trends during 1997, the most important developments in Benetton Group activities occurred in Europe, with a total growth of 13 per cent. American markets increased overall by 11 per cent, while the rest of the world was significantly influenced by the crises in Japan and Asia (-11%). Amongst the brands, best growth performance was achieved by Sisley, while Zerododici and Zerotondo, the clothing collections for children and babies, have confirmed the steady upward trend in their sales.

During the year, the development process, in terms of store size and quality of the world-wide sales network, continued, with the opening of new megastores in several major world cities, which are able to offer complete collections of clothing and accessories for the Benetton brands and to strengthen brand awareness and the young, open and international image of the Group.

Benetton Sportsystem’s (consolidated) income statement  for the second half showed revenues of 312 million US$ (552 billion Lire) and a gross margin of 109 million US$ (192 billion Lire), with a loss of 16 million US$ (28 billion Lire). In general, these results have been influenced by the severe crisis in the sports equipment market, particularly in the Far East, and have also been affected by the radical reorganisation process, initiated to integrate the technological and research skills of the sports brands, rationalise production activities, reduce inventories and introduce new and more aggressive commercial policies, also through the opening of a network of Playlife shops which will sell mainly sportswear and accessories. This is an energetic and exacting program, through which the Benetton Group intends to make sport one of the focal points of its activities, the positive effects of which are not expected before 1999. 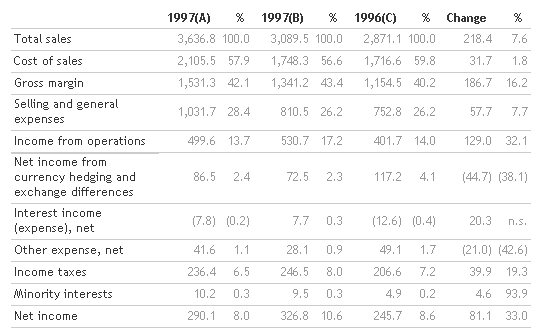