Gold in the Retail section at the Apex Awards, presented at the world's biggest digital creativity event 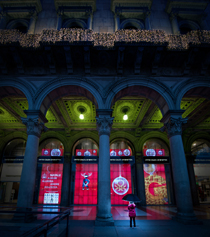 Treviso, 8 March 2012. Benetton Live Windows, the digital signage project developed by Fabrica for selected Benetton flagship stores, was last night conferred the Gold Apex Award in the Retail category by a jury of journalists working in the sector. The prize was presented at a gala dinner held at Caesars Palace in Las Vegas during Digital Signage Expo (DSE), the most important event in the world for the interaction and digital signage sector. It was collected by Alfio Pozzoni, who created the project for Fabrica, and Giovanni Flore, Benetton Live Windows Project Manager.

Benetton Live Windows is a network managed centrally by Fabrica. Thanks to its cutting-edge software architecture, it connects with ten Benetton flagship stores around the world in real time, from New Delhi to Moscow, and London to Shanghai. The concept revolves around the store window, which is the first point of contact between the brand and its customers: the space is no longer occupied by mannequins, which have been replaced by enormous high-definition videowalls. The store is transformed into a digital place-based media, interconnected with the other flagship stores.

A core aspect of the Live Windows project is Fabrica's collaboration with international academies of multimedia design, forming a virtual network of young talents from across the globe, and thus giving rise to a virtuous exchange of creativity. These creatives are invited, often at Fabrica workshops held at their universities, to compare notes and exchange their views of the world on the international network of Live Windows, which enables them to secure a visibility for their work that might otherwise have been impossible. This variety of topics reaffirms Benetton's philosophy in recognising the social value of the brand's communications, and Fabrica's commitment to supporting and promoting the creativity of the young.

Fabrica creates a dynamic programme of contents and applications, especially designed to suit the different formats of the various store windows as well as the type of public gravitating around the sales outlet. The object is to attract the attention of passers-by, thanks to the hyper-scale, and to the element of surprise and provocation. In addition to product-based communications, contents also include topical and social issues. The interactive applications are the main driver behind participation and user experience.

Benetton Live Windows arose from the reflection that stores have transformed very rapidly from simply a location where a purchase takes place, to a location where the more complex experience ofemotional perception of brand values unfolds. Hence, Benetton Live Windows has overturned the idea that the brand is the sole actor in communication towards the customer, and developed a new language that brings the customer to intuitively dialogue with the brand.

In addition to London, Moscow, Shanghai and New Delhi, the network to date also includes, amonst others, the Benetton flagship stores in Milan, Barcelona and Munich. Over the coming weeks, the network will expand to include Paris and New York, thus joining people of all latitudes together in a participatory experience that is both global and local.