Marking the issue of a new edition of Dante's Inferno, illustrated by Benetton's creative laboratory and published by Mondadori 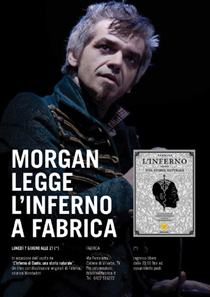 2010. Italian singer-songwriter Morgan interprets Dante at Fabrica, a crossroads of cultures, experiences and innovations. This inventive blend of contemporary culture and immortal poetry to help us understand the present, celebrates the release of a new edition of Dante's Inferno, published by Mondadori, illustrated and commentated by Benetton's creative laboratory.

The passionately inspired reading by the Italian singer-songwriter is driven by the same experimental nature that guided the creation of the book. Its illustrations were entrusted by Fabrica to two young British artists, Patrick Waterhouse and Walter Hutton, who took up the challenge with the fresh spirit of two explorers setting out to discover a new world to describe.

The book L’Inferno di Dante. Una storia naturale, Strade Blu – Mondadori, is a work that subverts the traditional visual representation of this poem, to give readers access to a deeper understanding of the relationship between theDivine Comedy and the modern world. It includes over 300 illustrations, all produced by hand using a range of different techniques, complete with comments. Together they form an imposing mosaic of figures, organised around a central idea: exploration of the real and mythological vicissitudes in the style and manner typical of natural history texts.

While traditional portrayals of the Inferno focus above all on the dramatic aspect of the situations and the pathos of the scenes, the two young Englishmen concentrate on the details of the characters and the complex historic and metaphorical universe of Dante. The choice of themes illustrated goes from Paolo and Francesca, captured in their final embrace, having been stabbed by Gianciotto's sword, to Minos and his skilful judgment, to the three wild beasts and Cerberus. Some pictures, such as the depiction of Lucifer, verge on the horror genre; others are playful and irreverent, such as the representation of the twelve Malebranche, the devils whose job it is to ensure that the sinners in the fifth bolgia of the eighth circle, destination of the fraudulent, do not get out of the boiling pitch.