Results approved by the Board of Directors

The substantial growth in net income was partly due to benefits from general improvements to the Group's business systems, associated containment of costs and significant reduction in net financial charges, which have more than halved  (from 27.2 to 12.6 billion Lire) following a considerable drop in net debt (to 235.5 billion from 489.7 billion Lire) in addition to the careful management of the exchange risk. Income from operations was about 14% of revenues. Cashflow totalled 312 billion Lire, and stockholders' equity has risen to almost 1,700 billion Lire as of June 30 1996, after payment of dividends totalling approximately 80 billion Lire.

The program to optimize production processes continued in 1996, with particular focus on the leading brands: United Colors of Benetton, Sisley, 012 and Zerotondo. During the first six months of the year, approximately 40 billion Lire was invested in further innovation and integration of systems in order to maintain sector leadership. In particular, a system to automate the packing of garments has helped to optimize shipping volumes, thereby further improving logistics. As a  direct consequence, transport costs fell by over 7 billion Lire in the first semester of 1996.

During the first six months of 1996, the commercial team has concentrated efforts to improve store image and the quality of customer service. This has included the opening of additional megastores which beyond offering a full range of products and accessories, project a young, dynamic image in an international environment.

London's new megastore at Oxford Circus has just opened: extending over 1,600 square meters on three floors, this is the world's largest Benetton store, offering the complete collections of United Colors of Benetton and Sisley. This megastore is equipped to promote musical events and young artists both inside the store and in the window displays. Another major store, on a similar scale, opened in the prestigious Scribner Building on New York's Fifth Avenue at the end of October.

PERFORMANCE OF THE GROUP

The consolidated statement of income for the first half-year is summarized below, together with comparative information for 1995: 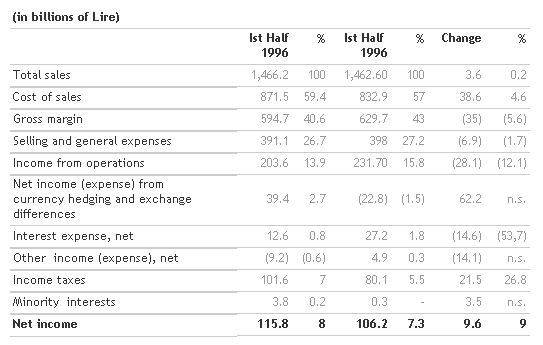 The comparative financial position is summarized below:

Cash flow during the period is summarized below on a comparative basis: