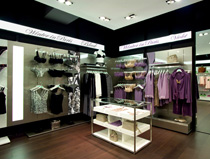 Ponzano, 9th November 2007. Undercolors – the Benetton Group’s underwear, beachwear and nightwear brand – expands across the world with a glamorous store concept, new openings in Italy and Europe and rapid growth in new markets like India.

With this new store layout Undercolors’ two lines are instantly distinguishable. Fun, the ironic line designed for those who prefer colourful, light-hearted underwear, looks its best against a glossy white background.Charme, the Clean Sensuality line for women who seek simple seductiveness, stands out against glossy grey walls.

The shop windows have modular-panels making it simple to adapt product to space, showing off both to best effect. Luminous bands around the perimeter walls effectively highlight the different themes in the collections. The whole concept is characterized by high-gloss surfaces and mannequins.

The programme of new Gloss-Undercolors store openings, which began in Barcelona in August, has quickly developed to include 15 new shops in major Italian and European cities including Florence, Venice, Rome, Warsaw and Athens. Fifteen more stores, including Madrid and Lisbon, will open in 2007.

New markets where Undercolors is concentrating future expansion are India, Eastern Europe and Northern Europe. In particular, the brand debuted in India in October this year and around 15 new stores are planned to open there in 2008.

Undercolors currently has 870 stores and sells 10 million garments around the world. Its international expansion will continue with 50 more new stores in 2008.