Results for the 2000 Financial Year Approved by the Benetton Board.

Results for the 2000 Financial Year Approved by the Benetton Board.

Ponzano, 29th March, 2001. Group consolidated net income of 471 billion lire (243 million euros), consolidated revenues equivalent to 3,908 billion (2.02 billion euros) and total investments of 591 billion (305 million euros): these are the principal results, approved today by the Board of Directors, with which the Benetton Group closed the 2000 financial year. At the Ordinary and Extraordinary Stockholders’ Meeting (convened for next 8th May), distribution of a dividend of 90 lire per share will be proposed, payable from 24th May and totalling 163 billion lire.

The conversion of the capital stock to euros and the contextual grouping of shares, in a ratio of one new share to every 10 shares currently held, will also be proposed to the Stockholders’ Meeting.

In terms of volume, growth in 2000 was over 10%; revenues, equivalent to 3,908 billion lire (2.02 billion euros), compared with 3,838 billion lire (1.98 billion euros) in 1999, include the deconsolidation of the activities of Benetton Formula and SAB (Socks and Accessories Benetton). Revenues from these companies had contributed a total of around 150 billion lire (77 million euros) to last year’s revenues.

2000 closed with net indebtness of 1,039 billion lire (536 million euros), compared with 576 billion (298 million euros) in 1999, as a result of the sharp acceleration in the investment program for the opening of megastores, which will make a significant contribution to overall turnover, already from the current financial year.

In 2000, the principal growth markets for clothing, other than Europe, were the United States, Korea and Japan, where double-digit expansion rates were recorded. In particular, the growth in the Japanese market occurred in the presence of a desired and marked reduction in the number of small stores, closed because they no longer met market needs, in parallel with the opening of large modern sales areas. In the future, this trend will affect all markets in which the Group operates.

Development of the megastore network, some of which directly managed, accelerated during 2000 and will continue at an even greater rate in 2001. The most prestigious opening concerned the Tokyo flagship store, on the prominent Omotesando street. Other important openings occurred in Kobe, in Japan; Moscow, the largest single brand store in Russia; Hamburg, one of the largest Benetton megastores in Germany; Athens, Milan and Rome. Among the numerous openings for 2001, London, Paris, New York and Vienna stand out.

Fabrica, the communication research and development centre created from the Group’s cultural heritage, assumed a central role in Benetton’s communication structure in 2000. Inauguration of its headquarters in a prestigious architectural complex near Treviso officially confirmed its function as creative leader of Group communications, as well as multi-cultural centre involved in projects of international esteem.

Again regarding communications, the Playlife brand played a prominent role in the 2000 Sydney Olympics, as official supplier to the Italian Olympic team. Thanks also to the success of the Italian team, the brand achieved huge international awareness, as confirmed by the double-digit growth in sportswear sales.

Forecasts for the 2001 financial year show an increase in revenues greater than those recorded in 2000, taking into account deconsolidations. Full-year operation of megastores opened in 2000, as well as openings which have already occurred or which will occur this year, will contribute significantly to this growth.

Group results (in billions of Lire) 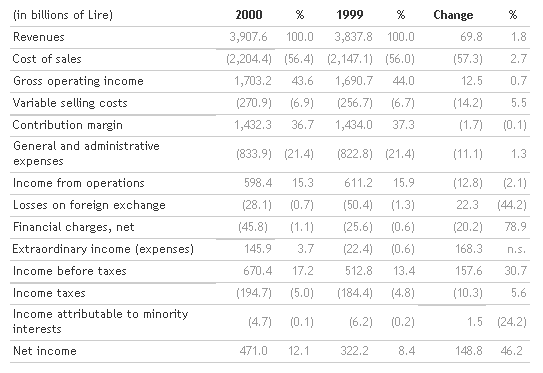 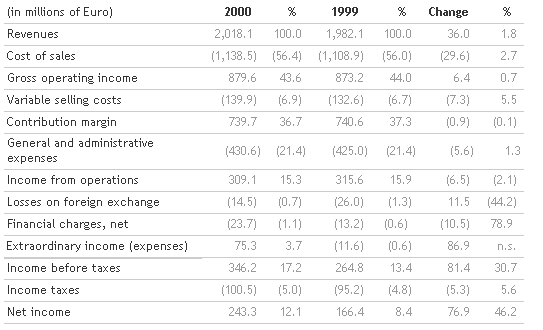