The Benetton Group Board of Directors approves the 2010 Financial Statements and proposes a dividend of 0.25 euro per share

The Benetton Group Board of Directors approves the 2010 Financial Statements and proposes a dividend of 0.25 euro per share

2010 confirmed the vitality of the Group, which was able to react with dynamism to difficult economic conditions in some of the principal European countries of major interest, limiting the relative fall in activity levels, whilst growing in almost all countries outside Europe, in particular in those with fast developing economies. In light of these difficulties, the efforts of the Group have been rewarded with the income achieved for the year, boosted by further strengthening of the balance sheet. During the past year, there was also a continuation of the investment programme to develop and strengthen services provided to the network of commercial partners.

Group net sales in 2010 were €2,053 million compared with €2,049 million in 2009, with an increase of 0.2% (-1.9% currency neutral).
Apparel segment sales to third parties were €1,948 million, substantially the same as in 2009 (€1,947 million).
The result achieved in emerging and high growth countries was particularly satisfying, up by 13.8% overall at current rates (+ 6.8% currency neutral), validating actions taken by Group companies located in those territories.

Non recurring expenses were €32 million, compared with €23 million in 2009, partly associated with actions relating to general expenses and cost of sales already mentioned, and partly due to write-downs in the value of fixed assets.

The excellent performance in the reduction of indebtedness, even with higher costs associated with the new loan arranged in June 2010, and the profits generated by foreign currency hedging operations, resulted in improved financial management, which showed expenses of €7 million in 2010, compared with €22 million in 2009.

The Group tax rate increased as a result of the expected reduction in benefits generated by the Group corporate reorganization in 2003.

Working capital, compared with December 31, 2009, decreased by €36 million, chiefly due to the impact of higher trade payables and a reduction in inventories. Trade receivables of €804 million increased slightly (+€13 million compared with December 2009), with a marginally worsening collection ratio due to the continuing restrictive conditions for access to credit for some customers, as well as the economic crisis which has strongly affected a number of countries in the Mediterranean area.

Total net investments were €122 million (€113 million in 2009) and were chiefly directed towards development of the sales network, through the renewal of some of the main flagship stores in major cities (Paris, Milan, London in particular), new openings in emerging markets (Mongolia, Siberia and Russia) and purchase of new locations (New York, Washington).

Capital employed was €1,984 million, down by €28 million compared with December 2009, due to the changes in working capital described above and a reduction in other assets, offsetting an increase in tangible and intangible fixed assets.

Net Group financial indebtedness reduced to €486 million compared with €556 million at December 31, 2009, due to a high level of cash generation. This result was attributable to the management and control of net working capital, while still maintaining the extensive investment programme already discussed.

Dividend payment and other resolutions

The Board then approved the draft annual financial statements(1) of the Parent Company and submitted a proposal to the next Shareholders’ Meeting, convened at Ponzano for April 28, 2011, in consideration of the positive cash generation, for payment of a dividend totalling around €43 million, equivalent to €0.25 per share (€0.23 per share in 2010).
Payment of the dividend is planned as from May 26, 2011, with coupon clipping date of May 23, 2011.

On April 28th the Shareholder’s meeting will also be called to deliberate the appointment of the Board of Statutory Auditors, expiring with the approval of the 2010 financial statements.

The Board approved a report for submission to the Shareholders’ Meeting relating to authorization for the purchase and sale of Company shares on the terms and conditions illustrated below, subject to revocation of the authorization by the shareholders' meeting resolution of April 22, 2010.
Authorization is requested for the purchase of a maximum number of shares which, together with the shares currently held, does not exceed the limit of 10% of the share capital and for a period of 18 months. The minimum purchase price is envisaged as not being less than 30% under, and the maximum price not more than 20% over the reference price recorded by the share in the stock exchange session preceding each individual transaction; the selling price is envisaged as being not less than 90% of the reference price recorded by the share in the stock exchange session prior to each individual transaction.
The authorization is requested to enable the Company to acquire a portfolio of treasury shares, which may also be used to serve any share incentive schemes. This authorization would also give the Company the power to act on its own shares, for the purposes and in the ways permitted by current legislative provisions, also taking advantage of any strategic investment opportunities.
The purchases will be made in markets regulated, organized and managed by Borsa Italiana S.p.A. and in accordance with its procedures.
The Company currently holds 10,345,910 treasury shares, corresponding to 5.663% of share capital.

Finally, the Board approved the Report on corporate governance and ownership structure, prepared in accordance with art. 123 bis of the Consolidated Law on Finance, relating to the 2010 financial year.

2011 opened with positives and negatives: on the one hand, collection of Spring/Summer orders is drawing to a close with the expectation of a slight improvement compared with recent collection performances (-4%) and there are signs of growth from the Fall/Winter 2011 collection. Again this year, the contribution of the more recently developed countries will be fundamental to maintain Group revenues, with continued uncertainty of demand in western economies.
On the other hand, the strong growth in costs, especially of raw materials, will lead to a significant and progressive erosion of margins during the year. The Group has identified further actions, also of an extraordinary nature, to contain the effect on operating profit, the percentage of which on revenues is under strong pressure in these circumstances.

The Group has established its 2011 action priorities in a work programme focussing both on development projects, and further process efficiency and cost optimization.

Franco Furnò, Director responsible for Commercial, Product and Human Resource areas declared: “I am satisfied, in these difficult circumstances, with the good results achieved in 2010, especially in emerging and high growth countries. The objectives for 2011 are to increase store profitability, by revitalizing the commercial offer of all product lines, strengthening brand attractiveness and reducing time to market, as well as continued improvement of the network where most of the large investment programme for the year is directed. These actions will have a return in the medium-term.”

Biagio Chiarolanza, Director responsible for Operations, foreign Business Units and Finance declared: “Programmes launched in 2009 and continued with determination in 2010 made it possible to achieve a good result on the cost and process front and therefore on profit. The Group intends to act vigorously in order to counter the increase in raw material costs and the expected erosion of margins. Actions have been put in place to improve efficiency in all areas and functions with particular emphasis on the production chain and direct sales activities in some countries within and outside Europe. The recent agreement for construction of a new production facility in Serbia also falls within this context. These measures as a whole will already generate benefits in the short-term, further increasing in the future.”

Actions carried out to date, others being planned and the financial strength of the Group allow the continuation of a sustained investment policy, an increase in dividend pay-out, while also permitting further reduction of the financial position.

Disclaimer
This document includes forward-looking statements, specifically in the section entitled “Outlook for the year”, relating to future events and operating, economic and financial results of the Benetton Group. By their nature, such forecasts contain an element of risk and uncertainty, because they depend on the occurrence of future events and developments. The actual results may differ significantly from those announced for a number of reasons. 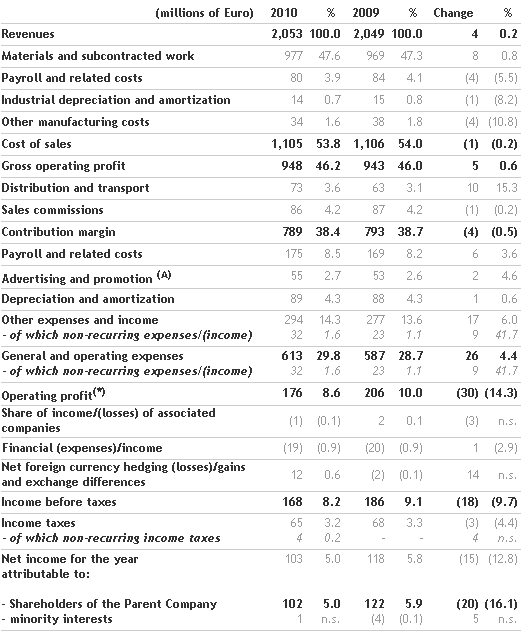 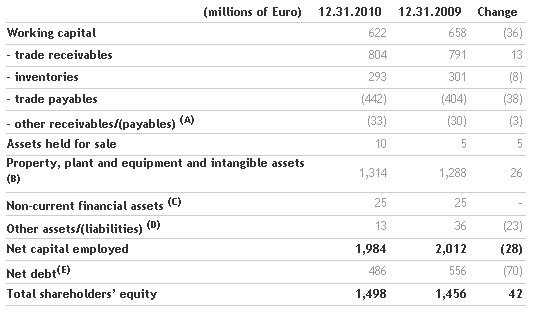 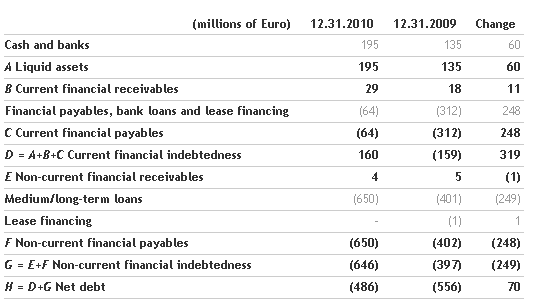 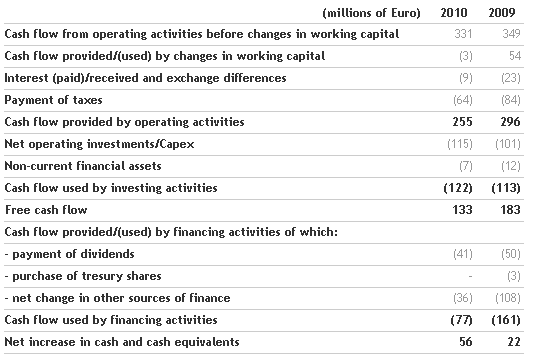 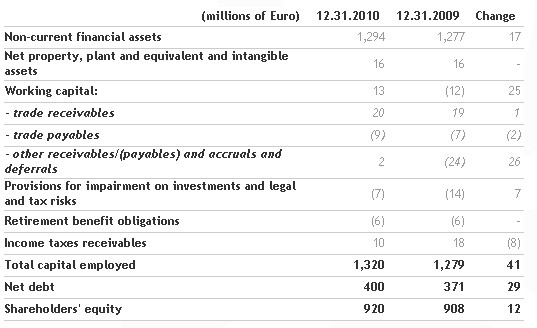