Significant growth has continued to be reported by countries in the Mediterranean Area and Eastern Europe, as well as by China and India. Exchange differences had a negative impact of 7 million euro on revenues, corresponding to 0.4% of the total, mostly due to fluctuations in the yen and Turkish lira.

Consolidated gross operating income reported a margin of 42.2% compared with 43.6% in 2005, particularly affected by the Group's policies for stimulating the network's development and boosting network margins and by a larger number of collections satisfying market demand. The higher costs associated with these measures were partly offset by continued efforts to improve manufacturing efficiency, while seeking to maintain the quality of both service and products.

Selling costs (distribution, transport and sales commissions) amounted to 137 million euro compared with 127 million euro in 2005, representing 7.2% of revenues, staying in line with the prior year.

General and operating expenses amounted to 489 million euro, up from 486 million euro in 2005, and accounted for 25.6% of revenues compared with 27.5% the year before; the expansion of the direct channel was the principal cause of this increase, partly offset by the reduction of non-recurring expenses.

Consolidated operating profit was 180 million euro compared with 157 million euro in 2005, reporting an increase from 8.9% to 9.4% of revenues.

Net income for the year attributable to the Group came to 125 million euro compared with 112 million euro in 2005.

Consolidated income statement. Highlights from the Group's income statements for 2006 and 2005 are presented below; they are based on a reclassification according to the function of expenses. The percentage changes are calculated with reference to the precise figures. 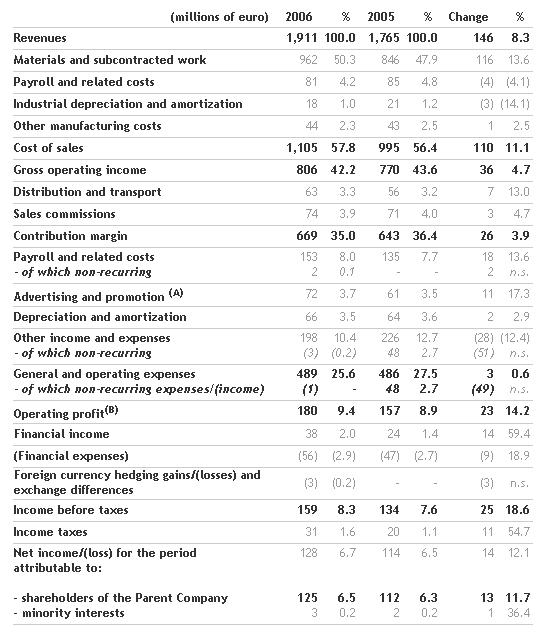 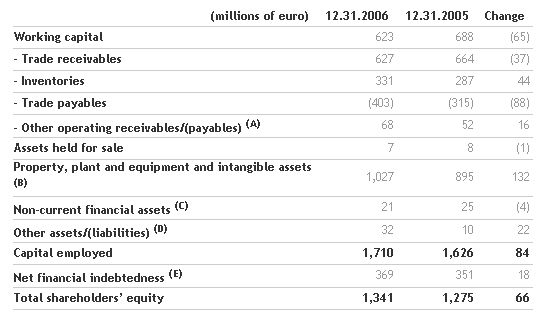 Net financial indebtedness amounted to 369 million euro at the end of 2006, reporting an increase of 18 million euro since December 31, 2005, and is analyzed as follows: 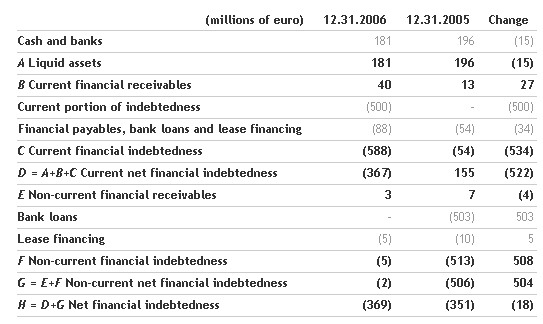 Most of the balance of 181 million euro reported in "Cash and banks" refers to ordinary current accounts and short-term or overnight bank deposits, with 61 million euro relating to checks received from customers at the end of December 2006.

The current portion of medium/long-term indebtedness refers to the syndicated loan of 500 million euro, maturing in July 2007.

Cash flow from operating activities benefited from higher income before taxes, which increased from 134 million euro in 2005 to 159 million euro in 2006.
Cash flow from operating activities before changes in working capital amounted to 258 million euro, reflecting:
- lower impairment losses produced by impairment testing;
- lower provisions, mostly for doubtful accounts and for reorganizing the commercial network;
- greater use of provisions associated with store closures.

Cash flows during 2006 are summarized below together with comparative figures for the last year:

(A)Includes 118 million euro in proceeds from the sale of financial assets.

Gross investments in the year totaled 204 million euro, mainly relating to:
- acquisitions of properties and activities for commercial use and the modernization and refurbishment of stores for the purposes of expanding the retail network;
- plant, machinery and equipment purchased to boost production efficiency, particularly at the manufacturing companies;
- the construction of a new factory by a subsidiary in Croatia;
- the purchase of store furniture and fittings.

Results of the Parent Company

As from financial year 2006 Benetton Group S.p.A. has started to prepare its individual financial statements under the international accounting and financial reporting standards issued by the International Accounting Standards Board and adopted by the European Union (IFRS).
For comparative purposes, the 2005 figures have also been reclassified in accordance with IFRS.
The results of Benetton Group S.p.A., the parent company of the Benetton Group, reflect the receipt of dividends from subsidiaries, its activities to optimize financial management, and revenues from services provided to Group companies.

The key figures reflecting the Company's performance are reported below. 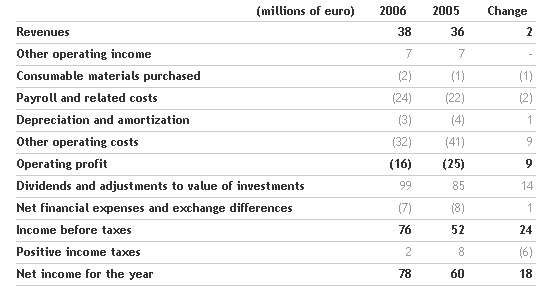 2006 reflects 10 million euro in additional dividends, almost all of which received from the subsidiary Benetton Holding International N.V. S.A.

Net income for the year is 78 million euro.

Consolidated revenues are forecast to follow a positive trend in 2007, with the increase estimated in the range of between 6% and 8% and so in line with the Group's expected sustainable future growth. These expectations are also confirmed by the orders received for the Spring Summer 2007 collection and by the initial orders received for the Fall Winter 2007 collection, reflecting the new structure of the product range. In fact, the greater segmentation of the different collections will mean that orders will be placed more evenly over the year; nonetheless, it is already possible at this early stage in the year to forecast a positive performance for the year as a whole.
The growth in sales will be the result of a major increase in volumes and a product mix which will see growth in all sectors of the apparel segment, with double-digit growth in accessories and shirts.
A faster pace of growth is also expected in 2007 by the Group's international markets, especially the Mediterranean Area, Eastern Europe, China and India, while the positive forecasts for Italy are principally based on greater product segmentation.
EBITDA, before non-recurring items, is expected to grow by 20%, reporting a margin of more than 15% of sales.
There will be continued focus on development through investment, which should amount to between 250 and 300 million euro, most of which will be devoted to supporting growth on those international markets with the best opportunities for growth. Significant investments will also be made in the logistics and distribution center in Castrette and in a new factory in Tunisia. A large portion of the capital expenditure budget will go on the IT systems which will have to support the growth in volumes and greater segmentation of the different collections.
Net financial indebtedness is expected to rise to approximately 450 million euro as a result of this increase in capital expenditure.

At the Shareholders’ Meeting, the Board of Directors will propose a gross dividend of 0.37 euro per share, up compared with 0.34 euro per share in the previous year and equal to 54.1% of Benetton Group net income. The Board indicated 30th April as coupon detachment date and 4th May as dividend payment date.

Changes to the Articles of Association

The Board will also submit for approval at the Shareholders’ Meeting changes to the Articles of Association to align them with the provisions of Law 262/2005.