The Board of Directors approves the 2010 first quarter results

The Board of Directors approves the 2010 first quarter results

Ponzano May 12, 2010 - The Benetton Group Board of Directors examined and approved the consolidated results for the first quarter of 2010.

In the first quarter of 2010, the market was still influenced by the general uncertainty in the global economy which is becoming progressively more settled. Signs of instability remain, however, in the markets of greatest relevance to the Group, particularly in Europe. In this context, Group net revenues in the period reached €457 million, up 1.8% (+1% currency neutral) due to the combined effect of:
- the mix of the collections, characterized in the period by product categories with higher unit values; this effect was partially offset by commercial policies implemented in favour of the sales network;
- satisfactory sales growth in directly operated stores;
- favourable exchange rates.

Established markets showed a currency neutral reduction in sales of 1.5%, with the Italian market substantially maintaining its position, and despite the slow-down in the Spanish and Greek markets; this contrasted with a better performance in continental Europe.

Emerging markets had a currency neutral growth of 19%, particularly in India where, having achieved a good presence in all the major cities in the country, the Group now aims to open new stores also in second and third tier cities.
Russia achieved positive results due to targeted actions to support the network. The refocusing of the existing network of stores in China was completed, and good growth was achieved on a like-for-like basis, following the coordinated action on product mix and the depth of the offer.
In Mexico, sales continued to grow in the quarter, with specific focus on store attractiveness.

Overall, the Spring/Summer orders collection is drawing to a close in line with expectations, with a slight fall compared with Spring/Summer 2009. Within the collections, the best result was achieved by the children's line, also due to the new offerings for young teenagers.

Gross operating profit for the quarter grew, reaching €216 million (€205 million in the corresponding period of 2009), equivalent to 47.1% of revenues (45.5% in the comparative period). Efficiencies generated, since 2009, in production and the supply chain made a decisive contribution to this result.

The contribution margin was €180 million, against €171 million in the reference period, and 39.4% of sales.

Operating profit amounted to €35 million (€25 million in 2009), corresponding to 7.7% of revenues against 5.5%, due also to savings achieved through the reorganization plan.

The improvement in financial expenses was attributable to both the reduction in interest rates as well as to lower average indebtedness in the period.

The expected increase in the effective tax rate is attributable to the lower benefits arising from the 2003 corporate reorganization, in addition to temporary phenomena in the quarter.

Compared with March 31, 2009, working capital was reduced by €61 million: in fact, the significant decrease in inventories amounted to €55 million and resulted from reorganization plan actions, in particular in the area of production planning.

In the first quarter, the Group made net investments of €25 million, compared with €50 million in the corresponding period of 2009. It is forecast, however, that investments in commercial locations of strategic interest will show a significant acceleration during the year.

Net financial indebtedness was €589 million compared with €763 million at the end of March 2009, with an increase of €33 million compared with December 31, 2009, due to the cyclical nature of the business; this variation was significantly lower than in the first quarter of the two preceding comparative periods. 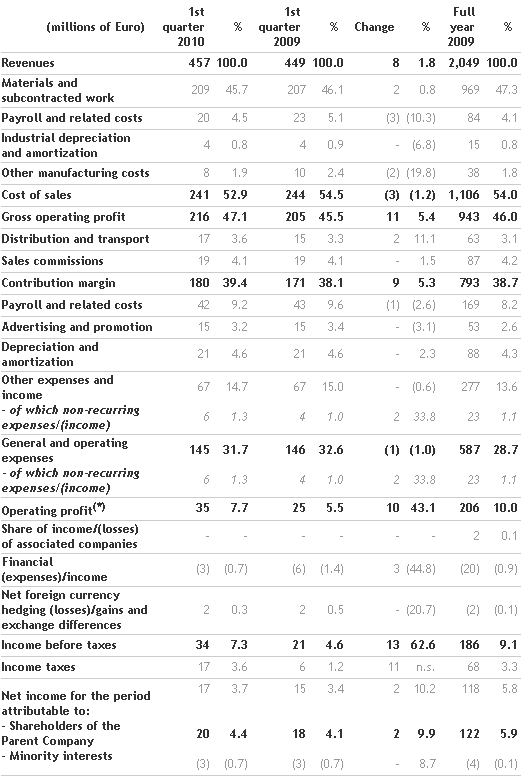 The most significant elements of the balance sheet and financial position, compared with those at December 31 and March 31, 2009, are presented in the following table: 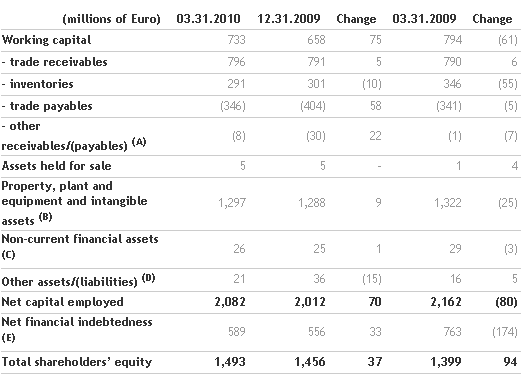 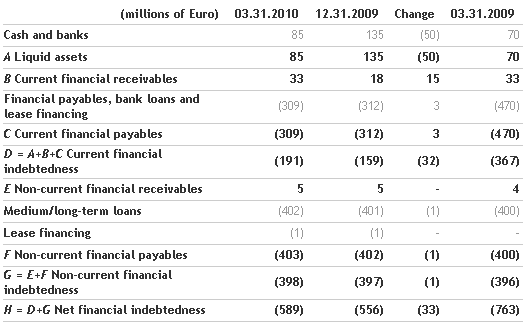 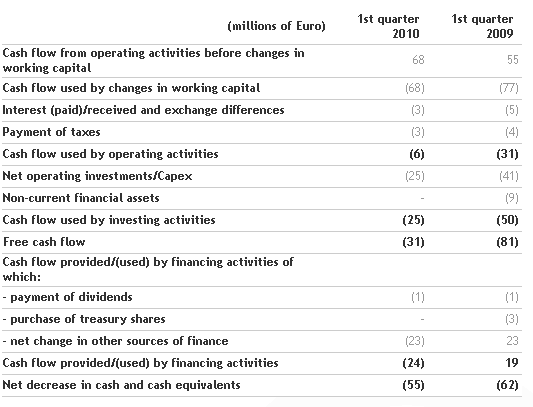 Disclaimer
This document contains forward-looking statements relating to future events and operating, economic and financial results of the Benetton Group. By their nature such forecasts contain an element of risk and uncertainty because they depend on the occurrence of future events and developments. The actual results may differ, even significantly, from those announced for a number of reasons.