The new BenettonTalk report, in 9 languages, is dedicated to the human condition of complete fulfilment 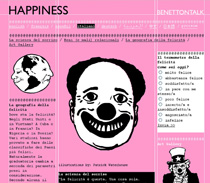 Ponzano, 14 March 2007. It is said that we only possess the happiness we are able to understand. For this reason BenettonTalk has dedicated its new report to Happiness (three sections plus a special feature with a collation of comments by the public) in nine languages (Italian, English, French, Spanish, German, Arabic, Russian, Chinese, Japanese): it ranges from happiness as a research subject defined by innovative economic disciplines to the ranking of the happiest countries, from the concept of collective happiness to indices which attempt to gauge it using objective criteria. According to some economists, for example, it may even be a method, an alternative to the GDP, for evaluating the true wealth of a nation.

The first section, The Science of Smiling, analyses the dimension of happiness: a single value which however differs for each one of us. Although for centuries the pursuit of happiness has been above all the subject of philosophical debate, even becoming a universal right under the American constitution, today science, politics and economics also question its nature. The economist Lord Richard Layard, in particular, maintains that in the measurement of happiness only 15% derives from economic factors. For the remaining part non-quantitative factors are involved such as security, stability, full employment, an efficient health service and problem-free personal relationships.

In the second section, Relational Assets (and Liabilities), an answer to an age-old question is attempted:  does money really buy happiness? Although it is true that a society that infinitely reproduces its desires becomes an unfulfilled society, it is also true that only some assets increase with use, i.e. the relational assets gained from interpersonal relations, from participation. An attempt to explain this paradox is offered by Robert H. Frank with the theory of relative consumption:  only when our consumption increases more than that of the others with whom we compare ourselves does our happiness increase. Owning a run-around car among a population of pedestrians, for example, procures a high sense of well-being. However driving the same car when everyone else is behind the wheel of custom-built cars may cause deep dissatisfaction.

The Geography of Happiness section journeys the world with a new criterion:  where does happiness lie? The first to venture an exploration of happiness were the researchers of the World Value Survey who in 2003 published the results of a survey of the top ten happiest countries that ranks Nigeria first, and in which the highest placed developed country, Iceland, is down at number six. Researchers from the New Economics Foundation launched in the summer of 2006 the Happy Planet Index, whose criteria of valuation cross-reference lifespan with level of satisfaction, quality of life and ecological parameters. As a result the happiest country in the world is Vanuatu island in the Pacific Ocean, with a total surface area of just fourteen thousand kilometres.

As always BenettonTalk invites its visitors to take part in the exchange of views and discussion. A special section, Tips for Being Happy, awaits comments, opinions, photos and personal recipes for achieving happiness. Work or health, children or personal fulfilment, family or politics? Friends, nature, reason, religion:  what do we really need in order to be happy? A virtual notice board for writing your opinion and reading proposals by others.

On BenettonTalk the report on happiness also follows other, highly debated, topics: the devolution of land to indigenous populations, languages that risk extinction, the defence of freedom of expression (in association with the Pen American Center), the potato and biodiversity and time banks. The next date, is to be with the theme of Gift, Altruism and Cooperation.