Monday 16th September for a week, 50 portraits of young Sicilians 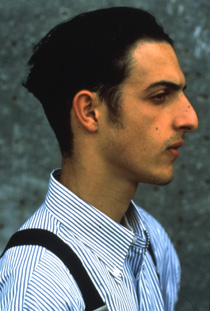 Ponzano, Italy, 16 September 1996. Corleone, with its ancient, sun-baked streets and squares, will be the natural, live setting for United Colors of Benetton Spring/Summer 1997 fashion catalog. Oliviero Toscani will be in Corleone from 16th to 22nd this month, to take photographs of fifty young people from the town. All born since 1968, they will feature in the new publication, two million copies of which will be distributed in one hundred countries worldwide.

The event will be a further contribution to the civic regeneration of Corleone, a project initiated by the mayor, Giuseppe Cipriani, and the Town Council. In this respect, the young people of Corleone will also bear symbolic witness to a renewed commitment to the cultural, moral and economic rebirth of Italy’s Deep South.

The Corleone catalog follows others undertaken by Oliviero Toscani among people with people, in Hungary, China, Norway, India, the Gaza Strip, and in the Tuscan region of Italy.