A behind-the-scenes look at modern journalism. COLORS 86 - MAKING THE NEWS

A behind-the-scenes look at modern journalism. COLORS 86 - MAKING THE NEWS 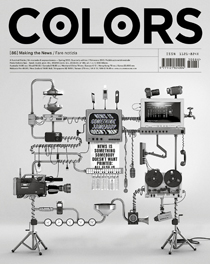 Perugia, April 24th, 2013. COLORS Magazine will take part in the International Journalism Festival in Perugia, Italy, from April 24th to 28th with a preview of its new issueMaking The News.

Today, 60% of British newspaper articles are copied from press releases and wire agency dispatches. American newspaper sales have shrunk by half in the last ten years. While traditional journalism is showing signs of crisis, new ways to make news are emerging. In Waziristan, Pakistan, where foreign journalists are forbidden, local photographer Noor Behram gathers and distributes unseen images of the aftermath of American drone attacks. Largely ignored by state television, footage of Egyptian anti-government protests are broadcast by activists in a makeshift outdoor movie theatre in Tahrir Square, Cairo. And in Mexico, where 52 journalists have been killed over the past seven years, the anonymously-run, crowd-sourced Blog del Narco has become a leading source of information on gang-related murders.

COLORS 86 takes a look behind the scenes of modern journalism, revealing tools and mechanisms used by old and new newsmakers: from paparazzi stakeouts to censorship, media hoaxes to photo-retouching tricks, not to mention cameras installed on drones, declarations of war via Twitter and Al Qaeda's activities on Facebook. To learn more, stop by the Raffaello room of Hotel Brufani at 11am on April 24th, where COLORS editor-in-chief Patrick Waterhouse will share his thoughts on making a magazine that, since 1991, has stood out for its striking photography and in-depth “slow journalism”.

The News Machine, an interactive installation designed and created by young talents at FABRICA, will also engage festival attendees from April 24th to 28th at the Spazio Cantarelli in Piazza della Repubblica 9. The installation is in continual motion, creating, transmitting and cannibalizing its own newsfeed across different media to stand as a mechanical allegory of newsmaking today.

COLORS is a quarterly, monothematic magazine founded in 1991 under the direction of Oliviero Toscani and Tibor Kalman. It is distributed internationally and published in six bilingual editions (English+Italian, French, Spanish, Korean, Chinese and Portuguese). The COLORS editorial team is part of FABRICA, Benetton Group’s communications research centre, and is composed of an international team of young researchers, editors, art directors and photographers. It is assisted by the constant collaboration of a network of correspondents from every corner of the world.
www.colorsmagazine.com

Founded in 2006 by Arianna Ciccone and Christopher Potter, the International Journalism Festival is an event held in April each year in Perugia, Italy. It is a program of meetings, debates, interviews, book presentations, exhibitions and workshops that bring together the worlds of journalism, media and communications. http://www.festivaldelgiornalismo.com/programme/2

Noor Behram, photographer, Pakistan
In 2011, US security analysts received 327,384 hours of video transmission from drones, enough to watch nonstop for 37 years. It’s called “pattern of life” surveillance, meant to reveal suspicious behavior in the United States’ areas of interest. In Waziristan, in northwest Pakistan, three or four US drones now buzz overhead day and night. The robotic voyeurs come armed: drone-launched Hellfire missiles have blasted more than 300 Waziristani homes, mosques and streets in a “covert” CIA-run war against Islamic militants since 2004. Yet despite constant video surveillance, facts about the war’s effect on local patterns of life are hard to find; drone footage is classified, and foreign journalists are barred from the region by the Pakistani government. Noor Behram disagrees. Since 2007, he has tracked down and photographed more than 70 drone-strike sites. Many of his photos show the bodies of children, wrapped in bright funeral robes or covered in dust, lying next to the rubble of their homes. Noor has seen more than 600 bodies, and makes his own estimate: every extremist killed by a drone costs 15 civilian lives.

Pino Maniaci, Telejato TV, Sicily
Pino Maniaci, 60, is anchorman and owner of Telejato TV. Every afternoon since 1999, Pino has reported on the latest crimes of the Sicilian Mafia. With the help of Pino’s adult children, Telejato TV broadcasts two hours a day from a converted apartment in the small town of Partinico, Sicily, Italy. On this island, an estimated 70 to 90 percent of businesses pay protection money to the Mafia. Telejato gets its scoops from community members who, according to Pino, prefer to report murder and extortion to the station than to the police for fear of reprisals. Pino was the first to speak the full names – instead of the initials – of local Mafiosi on air. Nearly 150,000 viewers in the provinces of Palermo, Trapani and Messina tune in to Telejato. So does the Mafia. According to Pino, former Cosa Nostra godfather Bernardo Provenzano once had a special antenna positioned to receive Telejato TV while in hiding. In 2009, the Italian Federation of Journalists awarded Pino an honorary press card.

Kelvin Doe, General Focus Radio, Sierra Leone
In Sierra Leone where nearly two-thirds of the population cannot read and Internet reaches only one percent of homes, most citizens rely on radio to keep up on current events. There are 64 officially registered stations in the country, the most popular being government-controlled Sierra Leone Broadcasting Service and Radio Maria, run by the Catholic Church. Then there are stations like Kelvin Doe’s. Three years ago, the then 13-year-old began rummaging through the trash cans of Freetown, Sierra Leone, looking for spare electronic parts. Over time, he found enough pieces to scrape together a homemade amplifier, a mixer, a generator, and eventually an entire radio station. Now aged 16, he broadcasts to his community under the nickname General Focus, with three journalists helping him provide music, comedy and news features. It is a pirate radio station that runs on hijacked frequencies, but, for now, Kelvin is free to make and distribute information on the topics he really cares about: local football matches and educational news from the United States of America.

Blog del Narco, Mexico
Today local gangs dictate what Mexican reporters have to write: in Reynosa, for example, the Gulf Cartel forbids reporting on kidnappings and extortion. With the Mexican media mostly silenced, locals may find it hard to get reliable information on the open war between Mexico’s government and its powerful rival drug syndicates. To show “what many media organizations have been trying to hide,” the anonymous authors of El Blog del Narco compile and publish user-submitted photos of found bodies. Launched in 2010, the blog is followed by hundreds of thousands of monthly viewers, including gang members who claim credit for corpses in the comments section. El Blog del Narco may now be Mexico’s most complete record of gang atrocities, which is why some question its source and motives.

COLORS 85 – GOING TO MARKET
Ever since the fall of the Berlin Wall, the free market has dominated the world. Today we can buy and sell, lend and borrow, invest and trade from one end of the planet to the other. COLORS #85 - Going to Market is a journey through balance sheets, currencies, customers, products and merchants in pursuit of the invisible thread that links Wall Street to Main Street in one chaotic and irresistible global market.

COLORS 84 - APOCALYPSE
Around the world, some people are already dealing with the environmental catastrophes that the rest of us will have to face in the near future. In issue #84 – Apocalypse, COLORS tells their stories and provides a guide to the methods and tools necessary for surviving climate change today, anywhere in the world.

COLORS 83 - HAPPINESS
What makes us happy? From Aristotle to the Dalai Lama, from Epicurus to the guy jogging in the park, everyone wants to know. So does COLORS. Issue #83 – Happiness investigates happiness and how to get it, from neuroscience to plastic surgery, from Prozac to positive thinking. Think of it as a non-judgemental guide to finding your source of serotonin.