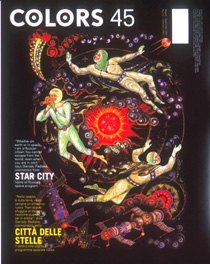 For Colors 45 we visited Star City, home of the late Yuri Gagarin, patron saint of the cosmos, and a 6,500-strong community of cosmonauts, space engineers, government officials and their families. This high-security military base, one hour from Moscow (by Lada) and 10 minutes by rocket from outer space, represents the heart of the Russian space program. It is here, in Star City, that Cosmonauts are put through their grueling seven-year training program in preparation for going into orbit. The place where all of the great firsts of space travel—first satellite, first living being (the dog Laika), first human, first woman and first space walk—were conceived.

But the glory of Star City, built in the early 1960s at the height of the Cold War, has now begun to lose its shine. Under-funding, neglect and declining political interest have led to gradual decay. The MIR space-station simulator languishes in a half-derelict warehouse, the gigantic centrifuge used to test G-force on cosmonauts is guarded by a sleepy caretaker who offers visitors shots of vodka.

Even the cosmonauts themselves, once the superheroes of the Soviet era, have lost their aura. Most of the children we met in Star City were not interested in following their fathers into space when they grow up. And at just US$250 (the average month salary of a cosmonaut), money is no incentive.

Despite waning government enthusiasm for the space program, the cosmos still holds a deep fascination for most residents of planet earth. So for the second half of the issue, COLORS commissioned photographers and journalists around the world to find out how ordinary people imagine outer space.

How did the world begin?
What do aliens think of us?
Are astronauts sexy?

Find the answers to these and many other pressing universal questions in the next issue of COLORS magazine.