Benetton Board of Directors approves the financial results for 1999

The proposed dividend, equal to about 5% of Benetton’s share value on the Stock Market, confirms the policy of centring greater attention on stockholders’ earnings, introduced last year.  The ROE (Return on Equity) rose to 14.9% from 13.2% in 1998.

In terms of volume, 1999 growth amounts to 10%, while consolidated revenues, compared with 1998 (when they were 3,834 billion lire – 1,994 million US$ -), take into account the de-consolidation of revenues of Benetton Shoes Japan and Spiller.  Activities of these companies contributed overall to around 90 billion lire (46.8 million US$) of last year’s revenues.

1999 closed with a debt of 576 billion lire (299.6 million US$), compared to 378 billion lire (196.6 million US$), resulting from both the higher dividends distributed during the year and from the intensive investment programme, particularly in the acquisition of highly prestigious and visible properties to support the development in quality of the sales network.

On the distribution front, development of the sales network, in terms of quality, has continued, with a decisive investment program for the opening of new megastores, some directly managed, which represent immediate and effective “show cases” of Benetton’s quality and style in historic and commercial city centres throughout the world. In addition to the complete range of garments and accessories, the new megastores offer a useful series of complementary services, becoming significant meeting places.

The reorganisation completed, the sport division achieved its best results in winter sports, in particular in the important Japanese market. Research and development, concentrated at Villa Loredan, near Treviso, has guaranteed the creation of new sports equipment featuring avant-garde technologies and innovative materials.  Including Nordica skis, bindings and plates, making this a total winter sports brand, and Prince’s revolutionary Triple Threat tennis racquets. All together, research activities in ’99 have resulted in the definition of 23 exclusive patents, in addition to 8 from the clothing division.

Furthermore, in 1999, sports clothing activities concentrated on Playlife and Killer Loop brands, the latter with a younger and streetwear nature, combining comfort and safety, which are typical of sport, with styles and colours, characteristic of the “made in Italy”. The growth of sports clothing is confirmed by the continuous development of Playlife sales network, especially in Europe, and, from an image point of the view, by the decision of the Italian Olympics Committee to allow Benetton and Playlife to create the official clothing of the Italian Olympic team for Sydney 2000.

During 1999, an e-commerce project was launched which will make it possible, by the end of 2000, to create a portal for sale via Internet of United Colors of Benetton, Sisley, Playlife and Killer Loop clothing collections, and of Nordica, Rollerblade, Prince and Killer Loop sports equipment lines. For this project, in addition to a network philosophy, which has always been present in its system, Benetton can draw on advanced distribution and logistics know-how, developed over the years to meet the needs of speed and globalisation. 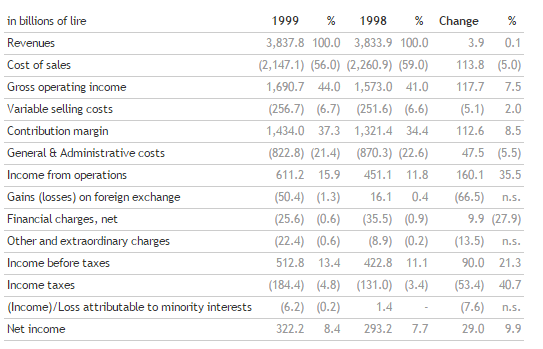