Board approves quarterly report - income up 29 per cent. Silvano Cassano appointed to the Board and as Managing Director

Ponzano, 12 May 2003 - The Benetton Group Board of Directors has approved the results for the first quarter of the year and has granted the powers of Managing Director to Silvano Cassano.

Revenues for the casual sector for the first three months of 2003, net of currency impact, are up by 3.8% to 351 million euro. Growth in the clothing division, in terms of revenues and volumes, was offset in particular by the expected reduction in turnover in the sports equipment brands, agreements for the sale of which were signed during the early months of the year. Overall revenues for the period were therefore 444 million euro against 447 million recorded in the first quarter of 2002.

Net income increased by 29 per cent, to 25 million euro, benefiting from the decisive reduction of fixed costs and the decision to sell the sports equipment division.

Self-financing in the period remained steady at 76 million euro against 75 million euro recorded in the same period of 2002.

Indebtedness at quarter end was 709 million euro against 756 at the end of the first quarter of 2002, and against 613 million at year-end. The change compared with the previous year first quarter end was due, in particular, to a net improvement in the management of working capital. Comparison with the amount at 31 December reflected the normal cyclicity of working capital and continuation of the investment program in the commercial area.

Despite the continuing crisis of the world economy in the international markets, and the resulting decline in consumer spending, the Group's performance is in line with the previous year and with its forecasts. With the conclusion of the process of internal reorganization and rationalization in the early part of the year and the sale of its businesses in the sports equipment sector, the Group's resources will be exclusively dedicated to its core business of casual and sportswear. Given this situation and the information currently available, the Group expects to meet its 2003 forecasts in terms of sales and margins. Its level of indebtedness is expected to be still lower at year end.

The Benetton Group Shareholders' Meeting, held today and chaired by Luciano Benetton, approved the 2002 financial statements, which closed with consolidated revenues of 2.0 billion euro, income before extraordinary items of 128 million euro and a net loss for the financial year of 10 million euro. Distribution of a dividend of 0.35 euro per share was approved, payable from 22 May, totalling 63.5 million euro, confirming a pay out ratio of 50 per cent with respect to the normalised net income.

During the Meeting the Chairman, Luciano Benetton, declared that for 2003 Benetton Group will maintain the policy of distributing of a dividend equal to about 50 per cent of net income.

The Meeting appointed the Board of Directors, nominating Silvano Cassano as a new director.

In the extraordinary part of the Meeting, it was resolved to merge by incorporation into Benetton Group the 100 per cent owned companies Benlog, Gescom and Gesfin, as part of the plan to rationalise and simplify company structure.

LETTER TO OUR SHAREHOLDERS

"The Benetton Group decided to make a break with the past in 2002 by ending its experience in the sports equipment business, whose results over the years had failed to provide the same level of satisfaction as the fashion sector. The program for the division's disposal was started during the year and completed in the early part of 2003.

With regard to the core business of clothing, our system confirms its ability to be competitive and generate value: although net income for 2002 was affected by extraordinary items deriving mostly from the sale of the sports sector, this did not harm shareholders' returns.

We have spent the past two years progressively improving our organizational structure. As regards distribution, we are investing in the network in partnership with over 2,000 distributors: we are rapidly expanding our flagship stores, while also concentrating on transforming our traditional retail outlets from small to medium-size.

The fact that we can rely on the energy of such a large group of entrepreneurs, ready to invest with increasing commitment in our brand, confirms the validity of our business model, where innovation, hi-tech and system speed are the basis of our philosophy.

I should like to emphasize the business's firm commitment, unique among its major international competitors, to maintaining production mainly in Italy and Europe. This is a demonstration of excellence, which focuses on those values of design and quality, greatly appreciated by the ever more complex and sophisticated needs of the global market.

It is superfluous to dwell on the international crisis and the gloomy outlook for markets and consumption. However, I should like to emphasize our vigorous determination in dealing with this situation: in fact, I have always said that it is during times of greatest difficulty that those who are most prepared are able to grasp the best opportunities." 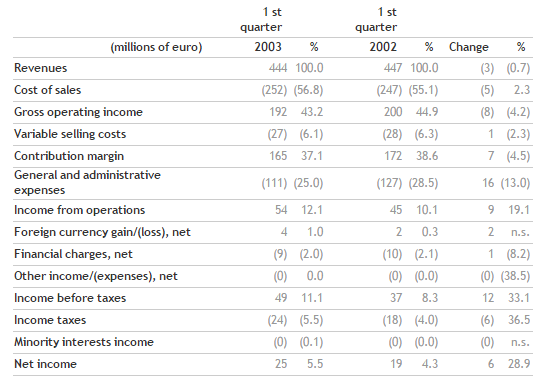