Ponzano November 13, 2007 - The Benetton Group Board of Directors, meeting today, examined and approved the results for the first nine months.

Analysis of the results confirm growth of all the principal financial indicators, with revenues increasing by 9.6% compared with the same period of last year and exceeding 1,500 million euro.

Investments in the first nine months of this year were 164 million euro (+40% compared with the same period of 2006) of which more than 55 million euro related to production and technology.

Regarding net income, the first nine months closed with 103 million euro, up by 9% compared with net income to September 30, 2006 which was 94 million euro.

The apparel segment grew by 10.6% in the first nine months on the strength of strategies defined and implemented in the last few months for all brands, taking revenues to 1,401 million euro.

United Colors of Benetton Adult achieved positive results with the new fashion collections and with increasingly segmented offerings for each different category of consumer. The Man collections for example, a priority for 2007, were so successful that Man line sales reached 18% of total brand sales, quickly approaching the 20% medium-term objective.

United Colors of Benetton Children performed well. Diversification of the offer continued for all age ranges, now concentrating on the pre-natal and baby world for small children up to 5 years old. For this segment the Benetton Baby was created, a series of stores offering collections which, in addition to focusing on style, pay particular attention to functionality. 50 dedicated stores are planned to open in 2008. They will welcome consumers into an environment specially designed for this type of product, with personnel who will be specifically trained to assist new mothers.

The excellent response from the public and the network to Sisley’s 2007 collections is confirmed by the trend in orders for 2008 Spring/Summer. Brand identity is further strengthened by the increased emphasis on the glamour and fashion content in the new collections. On this basis, Group growth can be accelerated, especially internationally, in consumer segments particularly attracted by fashion, using as a lever a trendy, high quality and attractively priced product. The strategy is completed by an experienced partner-managed network which was recently enhanced by the agreement with Trent, a retail company of the Tata group, for development of the brand in India.

The new layout of stores dedicated to Undercolors underwear was also successfully launched. The new Gloss concept, already implemented in 15 stores, has made it possible to further enhance the different product lines. Positive results were in fact achieved by both the better known Fun line, for those seeking colourful, light-hearted underwear and by the more sensual yet always elegant Clean Sensuality range.

The development process continued for the Playlife brand which, since Spring/Summer 2007, has opened 45 new stores in Italy and Mediterranean countries, in addition to restyling existing stores. The repositioning of the brand, with new collections and new store concept is producing results in line with expectations. The growth strategy is designed to give a further impetus to the brand at an international level, in particular in Eastern European countries and the former Soviet Union.

Accessories were confirmed as one of the drivers for future growth. Excellent sales in apparel stores were also reflected by the pilot project dedicated store in Rome. The strategy of opening accessory-only stores in the next few months provides not only for an increase in volumes but also for a widening of the range, with the addition of more high-end products.

In terms of geographical areas, the nine months results confirmed the first half year trend, with significant growth in both mature and emerging markets.

In Europe, growth reached around 13%, compared with the first nine months of 2006. In the region, it is important to note that Italy grew by more than 10%.
Russia grew at a fast pace, achieving a 35% increase compared with the period to September 30, 2006 and, in general, all Eastern European and former Soviet Union countries showed significant increases.

Positive results were delivered in Asian countries. In addition to the Group’s performance in China, growth in India to September 30 increased over 50% compared with the same period in 2006. In India, there are more than 140 United Colors of Benetton stores and the first stores dedicated to Children and Undercolors have also been recently opened.

Brand success was also confirmed by recent research carried out by an independent body which showed that United Colors of Benetton was the most popular brand among young and demanding Indian consumers.

Again in this period, the main growth factor was the strong acceleration in volume/mix, up 13.2% compared with the same period of 2006.

The increase in value of the euro had a negative impact of 14 million.

Gross operating income was 42.8% of revenues, compared with 42.2% in the first nine months of 2006. In the apparel segment in particular, gross operating income amounted to 623 million, 44.4% of revenues, compared with 44.1% in the corresponding period of 2006, influenced positively by management efficiency as well as by weakness of the dollar (impact offset by currency hedging, shown below EBIT).

Regarding EBITDA on ordinary operations, this was 226 million euro, with a percentage of sales of 15% against 13.9% in the same period of 2006.

Net income for the period attributable to the Group was 103 million euro, compared with 94 million for the first nine months of 2006, maintaining an unchanged percentage of sales. 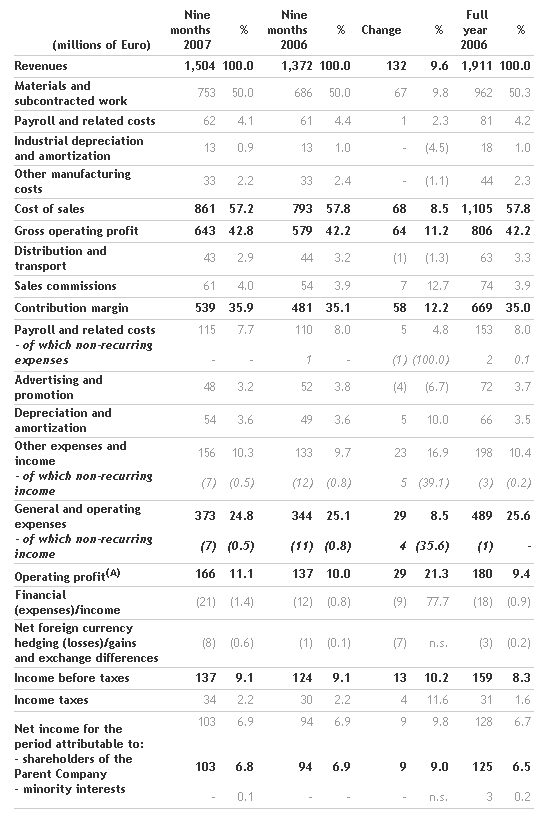 Compared with September 30, 2006, working capital increased by 92 million, due to the combined effects of:

In addition to comments already made relating to working capital, capital employedincreased by a further 158 million, mainly due to the increase in expenditure on tangible and intangible fixed assets.

Compared with December 31, 2006, capital employed increased by 313 million euro, driven by an increase in working capital due to the cyclical nature of the business, in addition to the net increase in tangible and intangible fixed assets resulting from gross operating investments in the period of 164 million euro. The greater part of investments, totalling 108 million, went to the commercial network. Expenditure on production, amounting to 35 million euro, related mainly to increases in production capacity of the Istrian (Croatia) and Tunisian centres and of the Castrette di Villorba hub in Italy.
Other expenditure amounted to 21 million and related mainly to Information Technology (start-up of SAP software relative to the working cycle and extension of application packages of this software to foreign subsidiaries).

The most significant elements in the financial situation, compared with December 31 and September 30, 2006, were as follows: 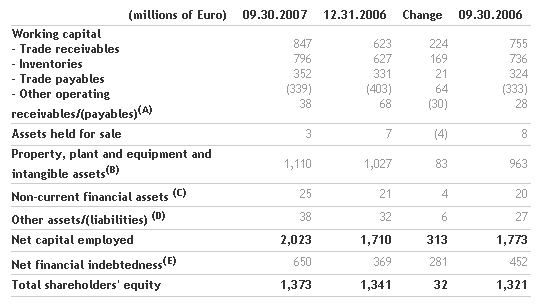 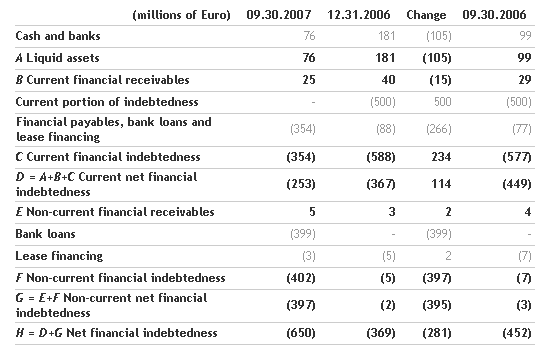 Cash flow used by operating activities was 72 million euro, compared with 38 million generated in the first nine months of 2006; it was impacted, in particular, by the increased flow absorbed by working capital due to:

Cash flow used for investing activities related mainly to investments for the commercial network, development of the Istrian (Croatia) and Tunisian production centres and of the hub in Castrette di Villorba (Italy), as well as Information Technology developments; disposals in the period referred mainly to sales of retail businesses in Milan, Nantes and Avignon, as well as production plant and machinery.

Cash flows and comparison with the first nine months of last year are summarized below:

Outlook for the full year

For 2007, consolidated revenues are expected to improve, compared with forecasts previously made, with growth expected around 9%, attributable to the results of the 2007 collections and the advancement of orders for the 2008 Spring/Summer collections.
EBITDA, calculated before non-recurring items, is expected to show an increase of over 20%, with a percentage of revenues greater than 15%. Capital expenditure in the year should be around 300 million and the net financial indebtedness is expected to be around 450 million at the end of the current year.

Disclaimer
This document includes forward-looking statements, in particular in the section “Outlook for the full year”, relative to future events and income and financial operating results of the Benetton Group. These forecasts, by their nature, include an element of risk and uncertainty, since they depend on the outcome of future events and developments. The actual results may differ even quite significantly from those stated due to a multiplicity of factors.